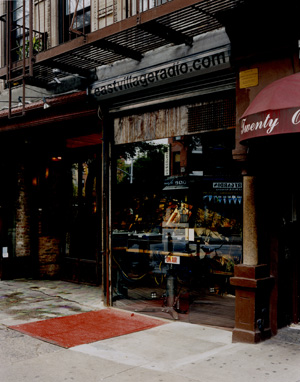 East Village Radio hasn't been around forever, but it sure seems like it has. The station runs out of a storefront on 1st Avenue, a quirky characteristic that intrigues those who walk for the first time, and this year they're celebrating their fifth year on the air. To do so, they're taking the music to the Seaport tomorrow for a full day of live performances and much more. More details are here, but expect Lil' Frankie's pizza (the owner is also the owner of the station), two stages of music and much more. Steve Cohen, station manager, told us a little bit about EVR and what to expect at the festival.

How long have you been with the station? 5 years, started the 2nd week.

When did the idea for East Village Radio happen? Jorge Docouto had recently moved up to NYC. Jorge had been in Austin, and was a part of Free Radio Austin, a pirate radio station. At that time Jorge was working with chef Frank Prisinzano of Frank Restaurant. One evening over a dinner that Frank cooked, Jorge brought up the idea of starting a pirate radio station. Feeling up for an adventure, Frank decided to make the idea a reality.

How did the storefront come about? Jorge went out and bought the transmitting equipment, and East Village Radio was born -- as a pirate radio station. Within a few weeks, Jorge was broadcasting on the FM dial at 88.1, and speaking to Frank via cell phone to determine the reach of the station. Frank was driving around the city in his car listening to the broadcast on his radio. Within the following month, the two got the word out that broadcast slots were available, which resulted in the first schedule for EVR. We broadcasted until December -- then the FCC stepped in to "discourage" any further transmissions. Fortunately, we were broadcasting over the Internet as well. This made the shift to an Internet only radio pretty seamless.

To elevate awareness of the station, Frank decided to move the station to its street front location, where it resides today -- adjacent to Lil' Frankie's restaurant. We like to think of the station as a welcomed gift to the community.

How are the deejays picked? Anyone can submit a concept for a show to the station, it's always been that way. Today, we do tend to develop shows from within our extended music community. Once we've heard a promising submission, we set up a test show. Our staff listens to the demos, and then we take our time to make final decisions. We prompt musical diversity here, so we're always looking to broaden the scope of our show offerings.

What can people look forward to at the festival? Fun for starters! Fans can expect a wide variety of groups and artists, in a great setting amongst the ships, harbor, and skyscrapers. We've worked for months to put together a roster that reflects the kind of programming that we deliver at the station each and every day.

Will give you an East Village Radio T-shirt if you register on our site! There's going to be great food available from Frank Caters who will be firing up grills and serving a stellar menu unlike any you'll find at an outdoor concert.

Plus, there's a second venue @ 210 Front street called @ Seaport. The indoor space will be home to Lil' Frankie's pizza made on premise, as well as beverages, including beer. The venue features a stage for performances by some great underground bands from Brooklyn and beyond.

Also, we're thrilled to have film programming from the Anthology Film Archives, and an artist collective to create truly multi-media event.

Is this the station's first big event like this? Yes, and it's only the beginning of great things to come from East Village Radio.

Please share your strangest "only in New York" story. On one occasion coming home from work, I was welcomed home by and array of unusual items strewn throughout the street in front of my building and the other buildings on the block. Something that looked like a sauna door, an old receiver, and other assorted items. When I got out of the cab I realized there was also a tremendous spill of white paint stretching across the entire street. The spill went across cars, and basically anything that was in its way. Picture Jackson Pollack painting from the top of a building, but he only gets one shot with about 7 gallons of paint! Later, I found the source of the mess -- my roommates, and a 7-gallon paint can the landlord gave us as his way of saying, you paint it, and indeed they did!

Which New Yorker do you most admire? The old New Yorkers -- the guys who are products of growing up in this city, with all it's quirky ways!

Given the opportunity, how would you change New York? In the old days every neighborhood in New York was uniquely different than the next. Lots of different family businesses that lent a lot of character to the city. It'd be a great thing to see more opportunity for small businesses to grow again. Believe it or not, in the mid 70's, I worked as a busboy and was able to afford an apartment in Manhattan! It's always a good idea to try and feed peoples souls, now that'd be a change.

Under what circumstance have you thought about leaving New York? Unintended retirement. Generally, my script writer has been on holiday for some time now.

Do you have a favorite New York celebrity sighting or encounter? Yes, we were extras in the movie Downtown 81, because my roommate was working on this film. The scene, Tom Petty gets out of a limo in front of the now defunct Rock Lounge, and as he passes through the crowd on both sides of the entrance, my friend gives him a really good pinch in the ass!

What's your current soundtrack to the city? My current sound track to the city is an amalgam of all the external sounds mixed with the sound of a chugging motor in my brain, or maybe, switching to another channel, and hearing some seminal song that is ingrained in memory usually against my own will, and finally, my own soundtrack music that's being automatically improvised in my mind while I'm walking or riding my bike.

Best cheap eat in the city. Let's talk about the past, and present. Here are/were my favorites. The soy burger at Dojo, The minestrone soup at the Bleeker Street Luncheonette with Zito's bread, I used to see Anita Sarko eating there frequently. Either the Roast Duck, or Steamed Chicken(with ginger puree) over rice with chinese broccoli, and if you went really crazy you added and egg on top, and they called that three precious ingredients. The all out version was about $2.50, the normal Duck or Chicken with Broccoli was $2.15. The Fun Noodle (wide rice noodle) soup with slices of the best roast pork I ever had( at the now defunct Wong Kee) was $1.95.

Present: a slice at Joe's Pizza. Moustache middle eastern comes with fresh baked pitas per order, and goes well with their humos, and the felafel plate with tahini and salads nice too.

Best venue to see music. Right now I'd have to say the South Street Seaport this Saturday!