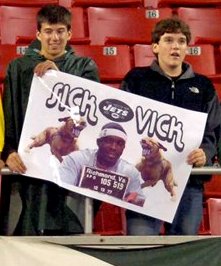 "I think it's tough. I think, you know, we don't say anything about people who shoot deer or shoot other animals. You know, from what I hear, dog fighting is a sport. It's just behind closed doors. I think it's tough that we build Michael Vick up and then we break him down. I think he's one of the superb athletes and he's a good human being. I just think that he fell into a bad situation."

We asked PETA for a comment and PETA President Ingrid Newkirk responded:

Well, there are two points here. First, yes, PETA doesn't think it's acceptable to hunt any animal for fun, so unless you are an Aborigine or similar, there's no excuse for hunting. Apparently, most of the American public agrees, considering that less than 5 percent of the American population hunts. Most people you ask will opine that shooting animals with guns—or, worse, by using a crossbow—is a cruel and cowardly pastime. That's because most Americans take to the woods to hike, take pictures, and enjoy wildlife alive, not bleeding on the ground and gasping for breath.

Second, deer hunting is not illegal, whereas dogfighting is. As bad as deer hunting is—especially when someone can't shoot straight, is liquored up, or just doesn't care to track the wounded—people aren't out there hanging live deer from trees with ligatures around their necks, spraying them with water, and then electrocuting them, are they? Stephon Marbury shows an ignorance about dogfighting that's mind-boggling; if he doesn't read the law, you'd think he'd at least read the paper. The Michael Vick case has made it about as clear as you can get that not only is dogfighting barbaric, it is also universally condemned, is against every state's cruelty-to-animals laws, and has never been miscategorized by anyone as a sport. If Marbury truly thinks that raising dogs to train them to rip each other apart, suffocate them to death, and slam them to the ground when they don't fight to satisfaction is a sport—or even thinks that letting two animals fight your battles for you is a sport—he needs psychological help.

Marbury told the Post today that he was misrepresented, saying, "I don't think [Vick's]'s right. He's 100 percent wrong. But this dude is trying to ask for forgiveness and everyone's turning their heads on a man trying to ask for forgiveness. The way it's going about in the newspapers and TV, it's ridiculous.'' He criticized how ESPN is fixated on the Michael Vick case and said that he never said dogfighting was a sport but only that he "heard" dogfighting was a sport. Well, it's not the first time we've tried to make sense of Marbury.

PETA is offering $5,000 rewards for information leading to the arrest and conviction of dogfighters in their Bite Back program.