Every now and then it's fun to take a break from fighting real-life bloodsucking mutants and spend an hour slaughtering some virtual zombies. Luckily, there is now a convenient way for you to escape this waking life for the world of the undead. Two brick-and-mortar locations for virtual reality gaming have opened in New York City this winter, giving New Yorkers the opportunity to experience the cutting edge of VR and thus the cutting edge of the zombie apocalypse.

Of course, there's more than zombies. An hourlong session at the "VR cinema and playlab" Jump Into the Light on the Bowery will take you through a range of VR experiences, beginning with a sampling of 360-degree videos. These are similar to what one gets with Google Cardboard—the ability to passively explore an immersive wraparound scene.

The Oculus Rift is where VR gets interesting. During Gothamist's recent visit to Jump Into the Light, founder Michael Deathless gave a tour of the device. You sit in front of a computer and put on goggles to enter the virtual world. There, you see boxes and hexagons that, with sensors attuned to your hand movements, you can manipulate, generate, stack, or topple with a theatrical sweep of the arms.

"The Rift makes you feel like a god or a wizard, manipulating things with just your bare hands," Deathless said.

This is perhaps a good time to mention that everyone looks like a buffoon with a VR headset on. Getting over your self-consciousness is the first step in giving in and enjoying the ride. This is particularly important for using HTC's full-body Vive console. Here, Deathless and his crew usually start people out on Google's live-painting-in-space program, Tilt Brush, which allows gamers to draw a little world around themselves. Once you are acclimated to moving around in a virtual world, the zombie killing can begin.

Moving boxes and painting pictures is cool and all, but it doesn't satisfy one's lust for blood. I played The Brookhaven Experiment, a terrifying survival game that may make you break out into a cold sweat, or scream, or punch your real-life companion in the face while trying to stab a zombie in the head. The badass swagger à la Angelina Jolie's Lara Croft that I adopted after only my first round lingered all the way to the F train.

It's the Vive's step-into-another-world experience that Deathless will feature in a forthcoming location on St. Mark's Place. Meanwhile, over on Union Street in Park Slope, entrepreneur Kishore Doddi has dedicated the space of his newly opened vrbar to the device. Doddi, who said most of his business has come from foot traffic along Union, gives customers the choice of sampling a range of VR experiences, including Google Earth; Job Simulator, where you can test out your chops as a chef, mechanic, or office worker; and The Night Cafe, which allows you to explore the cafe in the titular painting by van Gogh. Leaning out through a window, you peer up to the swirling cosmos of the Starry Night above, while the artist himself sits listening to the tinkling of a nearby piano. The Night Cafe is an enveloping, electric world of colorful brushstrokes that seem to vibrate with every movement. Wandering around, I felt a sense of calm that has escaped me since the real world became so terribly unreal. 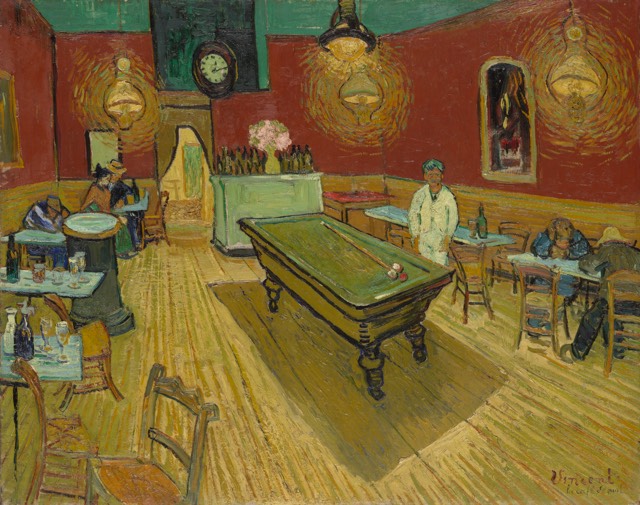 Unfortunately, when I removed the headset and left The Night Cafe, I got my first taste of VR-induced nausea. Lightheaded and bleary eyed, I stumbled, jelly-legged down the street. It took about an hour for the fog to lift. Then, I was jonesing to go again. I had just witnessed Starry Night come alive before my eyes.

Deathless speaks enthusiastically about the soothing, even therapeutic nature of VR. He likes to tell the story of a man who wandered in one night from a nearby homeless shelter. The man was very worked up, ranting and raving and demanding, "Give me a taste, give me a taste," Deathless recalls. "I was like, 'Alright dude, sit down.'"

As soon as the goggles were on, the man went still. Deathless acknowledges that VR "can be seen as isolating, yes. But this guy was isolated as it is. Most people are, somehow. And consciousness can be difficult to take. That's why people drink, or smoke weed, or take drugs, or whatever. People are always looking to escape."

Maybe VR isn't the worst way to get away from it all. It gives you a chance to experience different worlds, and to an extent someone else's world. Sure, right now, if you go to vrbar or Jump Into The Light, you'll spend a lot of time being stalked by hideous monsters. But it's only a start.

Deathless says he'd like to cultivate a more social experience of VR. He wants the new St. Marks spot to feel something like a karaoke bar, "where people can drink beers, eat burritos, and maybe make friends." Vrbar doesn't yet serve anything other than water for spun-out, motion-sick individuals, but Doddi hopes to expand its offerings.

So how much will it cost to escape the darkness of the real world? Jump Into the Light costs $45 for an hour; vrbar charges $10 for 10 minutes, with discounted rates for longer periods of time. 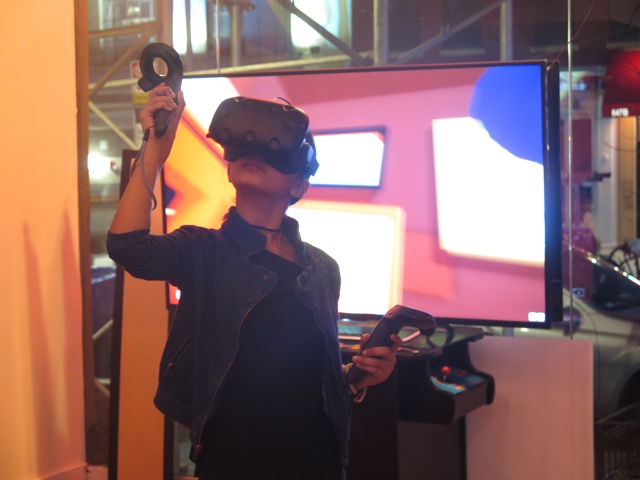 You could also shell out $3,000 for a console and top-of-the-line gaming PC, if you're rich and too despondent to leave the confines of your apartment. But that would preclude any actual social interaction; you'd basically be drinking alone.

These storefront spots are the place to start, and you'll feel better balancing a modicum of human contact with your virtual adventures.

Juliet Helmke is an arts and culture writer and a senior editor at Modern Painters magazine. Originally from Australia, she now lives in New York City.

#virtual reality
#vr
#original
Do you know the scoop? Comment below or Send us a Tip
A new Gothamist is coming! We’ve moved comments over to our beta site. Click here to join the conversation and get a preview of our new website.