Step Inside The Old Kings Theatre, Being Restored To Its Former Glory

Earlier this week we got a look at the restoration action inside the old Kings Theatre in Flatbush. It has been sitting in beautiful abandonment for decades, but will reopen next year, following this full restoration.

The theater, which originally opened in 1929 and shuttered four decades ago, will reopen in January 2015, restored to its original grandeur and "with sumptuous interiors inspired by the Palace of Versailles and the Paris Opera House." It will host performances—including music, dance, theatre, and comedy—and provide "a resource to foster and support creativity in the area, creating jobs and attracting thousands of visitors to the neighborhood." It will also become the largest theater in Brooklyn, with over 3,000 seats.

Features of the newly restored theater include:

The $93 million public-private project broke ground in January of 2013, and was spearheaded by ACE Theatrical Group and designed by Martinez+Johnson Architecture. 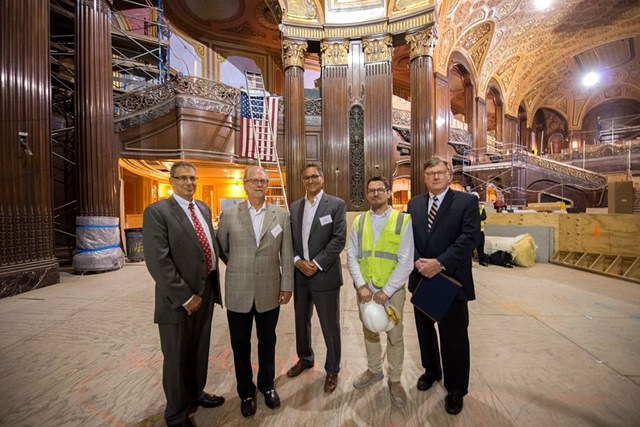 While many Loew's (like the one on Canal Street) have been left to rot, the five "Wonder Theatres" (Kings among them) are still up and running: The Loew's 175th Street Theatre is now operating as a church and venue, called the United Palace Theater (Radiohead's Jonny Greenwood will be there this weekend), the Loew's Jersey City operates as a cinema and performing arts center, the Loew's Paradise in the Bronx is a church, and the Loew's Valencia in Queens is a church, called the Tabernacle of Prayer.

The Kings Theatre is located at 1027 Flatbush Ave in Brooklyn, and once it reopens will be easily accessible by mass transit via the Q, B, 2, and 5 trains and B41 and B49 bus lines.