Neither the MTA nor the NYPD Transit Bureau need to do anything special to make the subway system scary—it is rife with horrors, all on its own. Crumbling ceilings that fall on your head, threatening to bury you alive at any moment? Canine-scale rats lurking inside towering trash mountains, ready to startle the pants off passersby just trying to get to work? Trains that creak and rattle and grind to a shrieking halt of their own accord, as if they were not controlled by the conductor but possessed by a poltergeist bent on stranding all you poor straphangers underground for eternity? We've got all that plus so much more, and yet these agencies decided we deserve a little something extra. And so, on October 18th and 19th, from 4 p.m. to 7 p.m., the MTA teamed up with the NYPD to bring us a spooky attraction inside the Union Square station: Haunted Subway.

Going into the event, we wondered what, exactly, the NYPD and MTA had up their respective sleeves. Would they pack a train car 20 people past capacity, lock the doors, and unleash a hungry rodent inside? How would that be different from the standard subway experience? Perhaps you will be relieved to learn that Haunted Subway is an optional hell, and just means that officers within the transit bureau built a haunted house in a corner of the station. It's a special activity officers cooked up sometime in July, for the kids, according to NYPD spokesperson Sgt. Carlos Nieves.

Roughly 30 actors—transit officers and their friends and family who volunteered to dress up—staffed this compact fright fest, donning uncommonly elaborate costumes. Standing in the very hot hallway that leads to this plywood murder shed, I watched a commendably accurate Pennywise emerge from a cloud of smoke machine fog. I saw a cop with half his face torn away bend down to pose for pictures with a little kid. The theme park horror sounds emanating from inside the house provided a suitably spooky background soundtrack for this wait, punctuated by jarring smacks on the wall that recalled hundreds of trapped souls clawing desperately at the windows of a stalled F train. 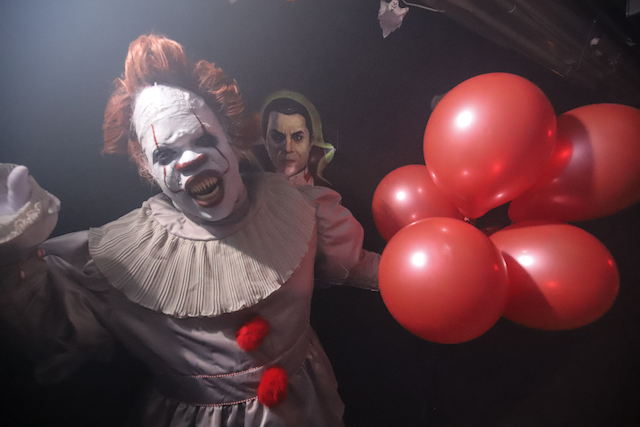 It was extremely dark inside the attraction, and I had a hard time telling the characters from fellow patrons. Still, the cast—a masked man with hooks for hands! a horned hellbeast brandishing not one but two swords! a zombie doctor who wants your braaaaaains! a chainsaw massacrer murderously swinging his saw at your face!—committed to their roles. One child in front of me gave the experience an immediate nope: her mom escorted her out after about 15 seconds. Two teens walking ahead fell down in apparent (and/or exaggerated) fright when two monsters launched a coordinated attack. Their terror seemed authentic.

All in all, Haunted Subway delivers a surprisingly thorough spook job. Perhaps this does not actually surprise you, given the MTA's special ability to conjure up haunting nightmare scenarios. To be honest, all they really need is an empty subway car on an otherwise packed train. *shudder*

Nieves said a selection of sponsors (including Headless Horseman, Blood Manor, New York Life, and Party City) paid for Haunted Subway, suggesting that the MTA did not spend money it absolutely doesn't have on this venture.

Anyway, if you are game to let our transit agencies scare you in a new and specific way, consider hitting the Haunted Subway on your way home tonight. Free candy and snacks for the kids!