It might seem like video game designers and queer party people have little in common, but a collaboration between Death By Audio Arcade and Ridgewood art space The Dreamhouse aims to highlight the many similarities between these disparate subcultures. “Having open arenas for people to participate in one another’s creative visions—that’s what it’s about,” says interactive producer Jason Scott Rosen, who has facilitated an enthralling new exhibition of DIY video games at The Dreamhouse.

“When you think about game developers, it’s kind of a toxic industry, and people who aren’t straight white men tend to get shouldered out,” says creative technologist Mark Kleeb, founder of the indie game-design nonprofit that grew out of Williamsburg DIY venue Death By Audio. “But I can very much relate to an underground space like The Dreamhouse. Even though we’re different communities, we come from the same place, we understand each other. Let’s celebrate that.”

The celebration comes in the form of a month-long display of eight of DBAA’s video game cabinets at The Dreamhouse, as well as the permanent installation of a brand new custom-built cabinet, DreamboxXx, featuring games by queer designers. DreamboxXx was unveiled this past Saturday at The Dreamhouse’s monthly blowout all-night dance party, Ova the Rainbow. In addition to spotlighting queer game creators, Kleeb designed the cabinet to match its home. “We wanted to take advantage of materials The Dreamhouse had lying around—mainly mirrored acrylic,” he says. “I worked with arcade fabricator Kyle Magocs and we tried to mimic The Dreamhouse aesthetic, using lots of leather and LED lighting to accentuate the acrylic.”

DreamboxXx currently features nine games, all of which were designed around the cabinet’s unusual control scheme: a two-player interface with one big shared button in the middle. The offerings include “Dream Hard” by Robert Yang, in which players battle white nationalists on The Dreamhouse dance floor; “Safe Space” by Elana Bell Bogdan, where the goal is to put barriers around Earth before meteors crash into it; and “Argpongi” by Ayla Myers, a Pong/RPG mashup. (The other designers featured are Josie Brechner, Juno McClure, Eddie Cameron, Fernando Ramallo, Nicole Leffel, and Haitham Ennasr.) “This partnership was such a natural fit,” Rosen says. “It’s a shared vision that was collectively assembled—something that’s really familiar to both of us.”

The Dreamhouse, which opened in 2016, presents parties, classes, and workshops, with art studios in the basement. “It’s an artistic situation all the time,” says founder Gage Boone. “It’s for the community: LGBTQIA plus plus plus. We’re here to make people’s creative dreams come true.” The space is an outgrowth of the Spectrum, which Boone opened in a former East Williamsburg aerobics studio in 2011 and closed in 2015. The new space is enormous by comparison, housed in what was once Wyckoff Manor Hall and later the personal studio of an ostentatious designer—“an Ecuadorian Liberace type,” says Boone. “We got all the relics of his existence. Very gaudy, very out of control.”

Boone describes his own history as a young queer kid, with video games being “something I could pretend I was into. When I was having to deal with masculinity and being a man, games were one of the ways I could kind of hide it, because it’s all about fantasy.”

This is a sentiment Rosen echoes: “I’m not a game designer, but I love the idea of a completely surreal and artificial vision purely based in what you find beautiful.” Having discovered Spectrum years ago “through the darkness of my isolation in New York City,” Rosen has also been very involved with The Dreamhouse, as well as having spent a lot of time at Death By Audio. "I wanted to connect these disparate [groups] that had been kicked out of their spaces, that are still fighting the fight and still trying to make sense of what they’re going through.” 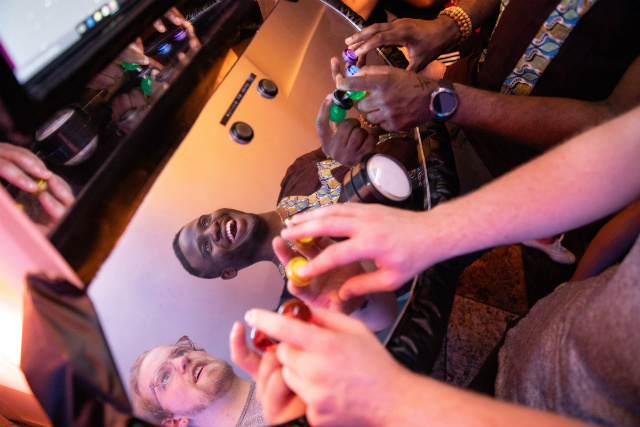 A large part of DBAA’s mission includes partnerships of this kind—the group has installed game cabinets at Elsewhere, Cloud City, Flowers for All Occasions, Our Wicked Lady, and more. One of the games on view at The Dreamhouse, Andy Wallace’s “Particle Mace,” lived at Silent Barn for years; it was so popular that the mailman used to stop in daily to play it, and the band Aye Nako named one of their songs after it.

Other games in the exhibition include “Crystal Brawl,” a version of Capture the Flag designed by Studio Mercado in 2013, which was the first cabinet DBAA ever built; Jane Freidhoff’s “Slam City Oracles,” a two-person “smash into things” game; “Star Versus,” built for the NES by Dustin Long; and “Video Freak,” designed by video artist Allen Riley and with a cabinet painted by Tim Fite, which has analog guitar pedals and a video mixer inside, so players can alter the picture and sound while playing. The most unusual cabinet on display is “Drink Rink,” a six-foot-long bar-top game with projections on the inside, which was designed to use custom-enhanced drink coozies as playing pieces.

It takes a wide array of skill-sets to produce one of these games, from visual designers to creative technologists to hardware specialists, so each one is a collaboration. That’s always been Kleeb’s intent: “My goal when this all started was to be like, if you can make a game, you can use a circular saw,” he says. “We didn’t want to just make cabinets for people; we wanted to do it with them.” His own background is in electronics, and he learned woodworking while living at DBA and having to build a wall—“You know, having to live in a DIY space,” he says.

Through this partnership, “We’re realizing how queer DBA is, in a lot of ways,” says Rosen. “We’re discovering gamers in the Dreamhouse community and queer people within the DBA universe. It’s not like that’s a huge revelation, but there’s a lot of power in a collaboration like this. There’s so much more substance than we anticipated.”

Check out The Dreamhouse's upcoming events for an opportunity to visit the arcade, or view the DBAA cabinets by appointment through June 8th; email here. DreamboxXx will live at Dreamhouse permanently.

Photos and GIFs by Walter Wlodarczyk.