Step Inside NYC's Most DIY Fest Of Summer 2017: Punk Island While Randall's Island transforms into a corporate-funded festival site every summer, there is one exception this year: the DIY fest called Punk Island. Typically the event takes place on Staten Island, but relocated its 7 stages and 100 band lineup this year.

Photographer Gretchen Robinette was on hand, noting that "Punk Island is as DIY and anti-corporation as you would expect... tents and tarps, plastic tables and duct tape." The non-profit event is hosted by "a collective of artists, musicians, and educators who have a love for all things punk and punk music," Robinette says, adding it brings "like-minded individuals together to keep the punk culture alive."

Their website states that they "aim to support a philosophy of creativity, rebellion and work to feed those who are hungry for a world where passion is valued over profit." 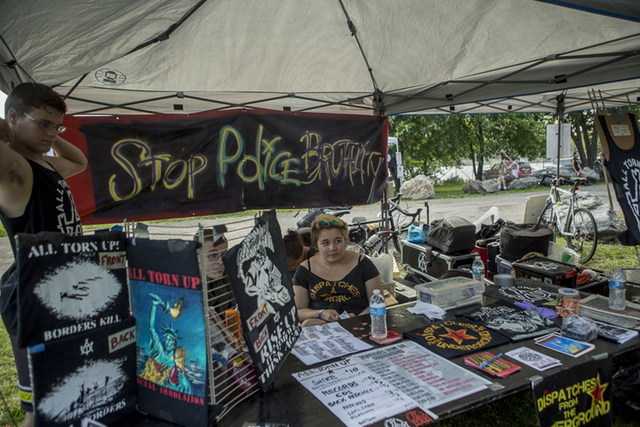 Part of the DIY aspect of the event means you've got to carry your own gear, and since no vehicles were permitted on site, the bands that participated had to lug their instruments there via the 125th street Manhattan footbridge, or take a bus."

Click through the above photos for Robinette's excellent documentation of humans slamming into each other—she tells us there was only one rule: "If someone falls, pick them up!"

#diy
#festival
#punk
#punk island
#randall's island
#original
Do you know the scoop? Comment below or Send us a Tip