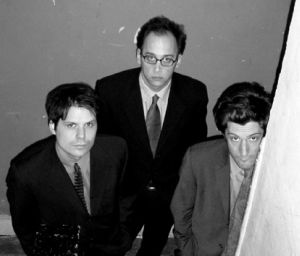 Michael Ian Black, David Wain and Michael Showalter met each other twenty years ago at NYU and have been performing comedy together ever since. Their college sketch group would go on to become the short-lived but widely-loved MTV show, The State. In 1997, the three of them began performing as Stella at Fez in Greenwich Village, a comedy show that would help define alternative comedy in New York throughout the decade to follow. That was also the name of the show the three made for Comedy Central in 2005, an absurdist mix of sitcom and sketch inspired by the shorts the three had been doing for years. But their legacy may end up being Wet Hot American Summer, the send-up of 80s summer camp movies that has taken on a life of its own as a cult classic since it was released in 2001. Tomorrow night Stella will host New York Magazine's 40th Anniversary Event that features performances by The National and Grizzly Bear.

Both The State and Wet Hot American Summer found much bigger audiences after they had left TV and theaters respectively. Is that frustrating to feel like the work is not connecting with people when it would be most beneficial to you? Yes.

Do you think that there's something specific about your comedy that gives it a certain cult appeal? The fact that we have a mass-suicide pact contributes to the cult feeling. Also the purple sneakers.

What do you miss most about the Fez days? 50% off Maguerita Pizza at Time Café. Also some of the waitresses had really good bodies. Also if you went back into the storage room you could just go crazy on the olives.

What's been the biggest change in comedy in New York over the last ten to fifteen years? Less people get the Ben Franklin references because it's too far in the past now. It was different in the 1990s.

If you guys were gonna go a Kings/Comedians/Rednecks of Comedy Tour, what would it be called? ComedyFest.

Why do you guys hold back from writing nude scenes for Paul Rudd? LOL - right on!

Which of you is the most manly and why? Probably Showalter, because he's the most athletic.

What prompted you guys to start wearing the suits? Our ripped t-shirts, blue jeans and tennis shoes were in the wash.

What are the most embarrassing TV shows each of you watch regularly? We hate to admit it - but we love watching Mad Men!!! We're sorry, it's addictive!

Are there any sketches from The State that you would be fine with no one ever bringing up to you or quoting from again? There are like four or five of them, yeah:

You guys have made pretty formidable careers for yourselves while for the most part sticking around New York. What made you believe that was possible? What's made you never wanna leave here? New York is a great city with an intangible energy that pulses through it. It's the only place where you can order Thai food at 3 a.m. and the next day go to the Met and see an incredible Van Gogh and then get an amazing hot pretzel right on the street.

Please share something that makes you feel special inside. Making people laugh. There's nothing quite like it. Especially with the bail-out (rescue) and the whole sub-prime thing and everything. There's never been a time when the country needed laughter more than now, except maybe during the civil war when thousands were slaughtered, many of them brother against brother, so...