Last year, some subway riders were startled when they stepped into 42nd Street shuttle trains which were plastered in Nazi imagery to promote Amazon's drama series, The Man in the High Castle, based on Philip K. Dick's novel that imagines a world where the Axis powers were victorious after World War II. The ads were removed (Governor Cuomo asked the MTA's chairman to yank 'em), but the show was renewed for another season, which meant that more advertising would come... which it has.

Uri Katz spotted this huge block-long billboard on Broadway, between 51st and 52nd Street, on his way to work this morning. "Because of traffic, the first thing I saw was Lady Liberty and the Nazi salute and my heart missed a beat," he told us.

"I know the show, and watched the first season myself, but I can think of a million better ways to promote this show, and I can't even imagine how a Holocaust survivor who lives in the city would feel if they saw that," Katz continued. "This is tactless in so many ways."

We've reached out to Amazon for comment. Last year, the company didn't directly comment on the subway ads, but issued a statement saying, "Amazon Studios creates high-quality, provocative programming that spurs conversation. The Man in the High Castle, based on an acclaimed novel, explores the impact to our freedoms if we had lost World War II. Like Transparent and the movie Chi-Raq, stories that society cares about often touch on important, thought-provoking topics. We will continue to bring this kind of storytelling to our customers." 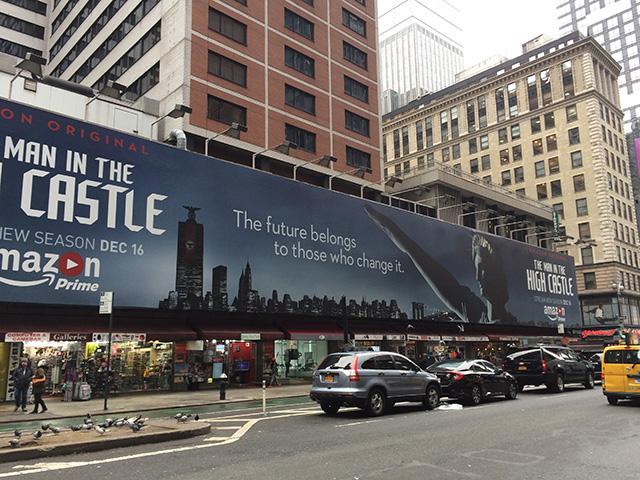 As Evan Bernstein, the Anti-Defamation League’s New York regional director, said of last year's subway ads, "On the television program, which explains this is the notion of an America controlled by Hitler, you get that context." The train's ads were "viscerally offensive, because there is no context as to what it means."

The massive billboard, depicting America's famous symbol of liberty succumbing to fascism, comes as hate crimes are on the rise and white nationalists celebrate the President-elect with Nazi salutes.

"I'm originally from Israel, my grandparents are Holocaust survivors and for someone who grew up having this as a part of his life I find this very disturbing," Katz said. "My friends from Israel are furious and happy they don't have Amazon Prime there."

Update: Amazon Studios released this statement, "Season two of The Man in the High Castle, based on Philip K. Dick’s acclaimed novel, continues the journey into an imaginary, fictional world that explores the “what ifs” of an alternate history in which America lost World War II. Season two debuts December 16 and if you're interested to see what an alternate world could look like if history had gone another way, you should watch the show."

#amazon studios
#nazi salute
#statue of liberty
#the man in the high castle
#original
Do you know the scoop? Comment below or Send us a Tip