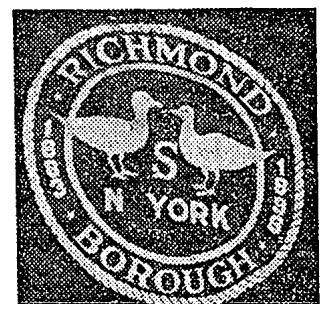 Recently we ran across this little bit of information: Staten Island wasn't officially called that until 1975. Prior to that it was called the Borough of Richmond. But did anyone ever call it that? For more, we turned to some of the city's keepers of such information.

Cara Dellatte, Archivist/Researcher at Staten Island Museum, tells us: "It was used interchangeably throughout our history. The use of Staten Island was named by the Dutch when they first came to the island. Staaten Eylandt (literally 'States Island') was named in honor of the Dutch parliament known as the Staten-Generaal. When the English took over Staaten Eylandt was anglicized to Staten Island. In 1683, the colony of New York was divided into ten counties. As part of this process, Staten Island, as well as several minor neighboring islands, were designated as Richmond County. It appears that both names were used throughout our history."

Angela Montefinise at the New York Public Library tells us that in their historic newspapers database, the words "Staten Island" were used repeatedly as far back as the 1800s. She also points to a NY Times article from April 9th, 1975: "Staten Island Is Official, The Name Dutch Chose," the headline declared.

The article (PDF) reads, "Like most Staten Islanders, Borough President Robert T. Connor was always a bit unsettled about the borough's official name, what with their mail often winding up in Richmond Hill (Queens) or Richmond (California, Indiana or Virginia)." Connor began "agitating for the City Council to adopt Staten Island as the borough's new name. Finally, late last year, the Council unanimously approved, and Mayor Beame eventually signed, a resolution sanctioning the name, which was given to the island when Henry Hudson discovered New York harbor for the Dutch in 1609." Here's an article (PDF) from when the vote went down, which states there was some "confusion" with the borough having, essentially, two names.

Connor assured everyone that the borough name change wouldn't cost much—"The words 'Staten Island' are being typed in above X-ed out 'Richmond' on official borough stationary; the borough seal, which remains intact, is being supplanted with a two-year-old borough emblem depicting a hilly green island against blue seas and Albany has received an application to change the license plate on Mr. Connor's official car from RB to SI."