Stanley Kubrick Documented NYC As A Teenager In The 40s, Here's What He Saw

If you're familiar with the Museum of the City of New York's portal to the past, then you're likely aware that Bronx native Stanley Kubrick used to document New York City and its inhabitants for Look magazine long before anyone heard of Dr. Strangelove, gone on a psychedelic ride through 2001: A Space Odyssey, or wondered what Tom Cruise's sex life might be like.

The Museum is now bringing Kubrick's early photojournalism work offline and on to its walls, for a show called Through a Different Lens: Stanley Kubrick Photographs, opening this week.

Kubrick was a photographer for the now-defunct bi-weekly from 1945 to 1950, when he was just a teenager "with an uncanny photographic sensibility who was already scouting human-interest stories." The exhibit aims to show Kubrick's "creative transformation" from photographer to legendary director, as well as highlight his work as a documentarian of 1940s NYC. From the Museum:

Kubrick explored the grit and glamor of the city, turning his lens on the nightclubs, street scenes, and sporting events that made up his first assignments, and capturing the pathos of ordinary life with a sophistication that belied his young age.

Turning his camera on his native city, Kubrick found inspiration in New York's characters and settings, sometimes glamorous, sometimes gritty. He produced work that was far ahead of his time and focused on themes that would inspire him through his creative life. Most importantly, his photography laid the technical and aesthetic foundations for his cinematography: he learned through the camera's lens to be an acute observer of human interactions and to tell stories through images in dynamic narrative sequences.

Kubrick's early years at Look proved to be the start of his celebrated career as one of the 20th century's great artists; it was a time when he honed his skills as both a storyteller and an image maker, albeit through a different lens. 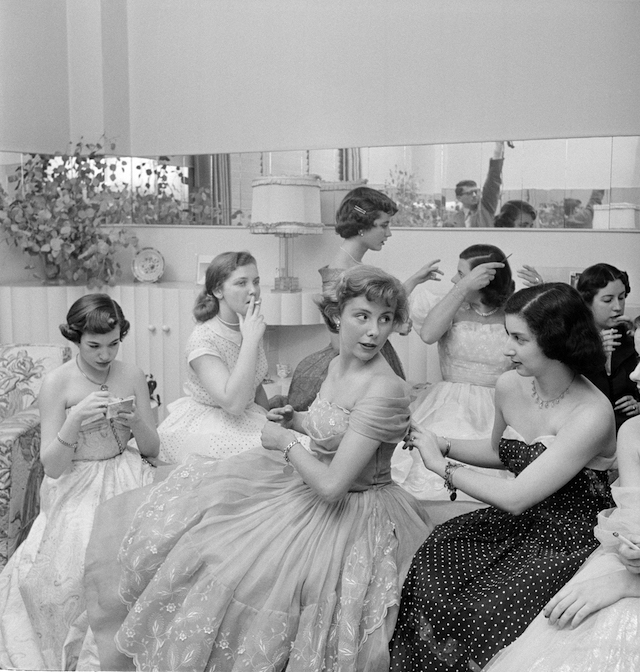 Stanley Kubrick, Betsy von Furstenberg with friends from The Debutante Who Went to Work, 1950

Click through for a small sampling of what you'll find at the exhibit, which will feature 120 photographs, many of which were never published.

Through a Different Lens will open to the public on Thursday, May 3rd, and remain on view through October 2018. The show will also be accompanied by a 300-page, large format book, also due out in May.