Squirrel Massacre in Astoria Must End! 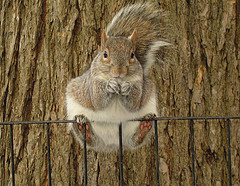 Astoria's Queensview Co-op is up against some wildlife advocates after hiring a nuisance wildlife control operator (NWCO) to trap and kill squirrels. The Empty Cages Collective is volunteer-run grassroots animal advocacy organization, and they want to put an end to what they deem an "ineffective attempt to manage the squirrel population."

In one corner you have the Queensview Co-Op, who are claiming that the pesky squirrels are chewing wires on their vehicles and getting into homes. In the other corner, Empty Cages assures them there is a more humane way of dealing with the problem (hawks?), and that new squirrels will simply replace the killed ones anyway.

According to PJ McKosky, spokesman for the Empty Cages Collective, these squirrels will continue to get into homes and chew wires if no habitat modification or repellents are used. Thus, an endless and expensive cycle of inefficient and cruel trapping of animals has the potential of becoming commonplace. McKosky advocates humane deterrents to prevent squirrels from entering areas (like attics, windows) by using chimney caps and other barriers.

The Queensview Co-op promises the squirrels are being released "elsewhere" after they're captured -- a lush green squirrel farm upstate, perhaps! No one, especially not the animal advocacy volunteers, is buying that; "the fact is many NWCO companies lie about the final disposition of the animals they trap." To that end, the collective is asking that the public band together and demand the Queensview Co-Op puts an end to their cruelty. Get in the letter-writing mood by reading about the friendly squirrel of Prospect Park, then find more details here.