Spitzer Videos of the Day: "Hookers is Fun," "Whores"

Okay, the video of Governor Spitzer's short, vague apology is a classic addition to the apologetic politicians reel, but late night writers got to dissect the Hookergate. David Letterman offered up a Top Ten list that included references to Roy Scheider and Bubba (video, above; entire top ten list after the jump). 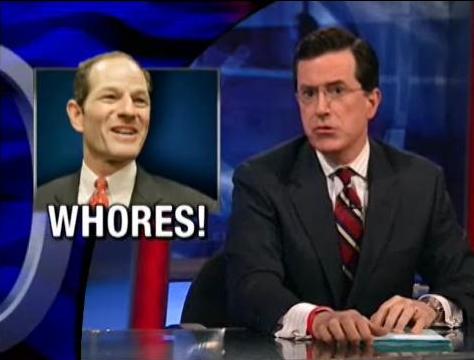 Stephen Colbert savored the fact that Spitzer had appeared on his program the day before the alleged tryst (Spitzer touted his superdelegate support for Clinton) and riffed on the scandal and cost of "Kristen" (video after the jump).

The Daily Show's Jon Stewart devoted a few minutes to the scandal, noting the irony of wiretapping a former Attorney General, until explaining the show needed to cover the Wyoming caucus because the Spitzer scandal would certainly be around on Tuesday (he's right!).