Earlier this month, the mayor's office announced that Spike Lee's Crooklyn had been chosen as the winner of the inaugural "One Film, One New York" competition, in which New Yorkers got to vote on a quintessential (and family-friendly) NYC-focused movie to be screened in parks and theaters across the city. The 1994 film, a gorgeously-shot coming-of-age tale set in 1970s Brooklyn, beat out four other fellow contenders: Martin Scorsese's New York, New York, Susan Seidelman's Desperately Seeking Susan, Gene Kelly and Stanley Donen's On the Town and Ang Lee's The Wedding Banquet.

"Crooklyn was written by my younger siblings Joie, Cinque Lee and I. It's a semi-bio story of our family—the Lees growing up in the pre-gentrified black and Puerto Rican hood of Fort Greene in 'Da Republic of Brooklyn' during the early '70s," Lee said upon hearing news of his victory. "More than anything, Crooklyn is a love letter to our long gone mother, Jacquelyn Shelton Lee."

On Wednesday night, the Mayor's Office of Media and Entertainment organized free screenings of the 1994 film in parks and theaters in all five boroughs. Before setting off for Fort Greene Park, Spike, along with his two younger siblings, made a brief appearance at the Film Society of Lincoln Center, where we were able to (very briefly) catch up with the legendary director about his winning film, gentrification, and the president he calls "Agent Orange."

It's been more than two decades since the movie came out, and over 40 years have passed since the period it was based off. Why do you think the film still resonates with people all this time later? I never really sat down and analyzed it. I'm just happy this is going to be screened in all five boroughs. Hopefully the weather will hold off so we can have these outdoor screenings, especially the one in Fort Greene, Brooklyn.

How does it feel to have your old neighborhood get to watch this film in particular? They've seen it before, but it'll be special tonight. There's a scene we shot in Fort Greene Park right after the funeral. It should be good. 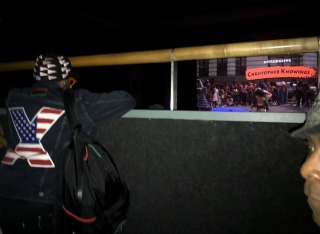 Spike watching the opening credits of Crooklyn at Walter Reade Theater just before heading to Fort Greene
The area has obviously changed a lot since your childhood. Can you talk a bit about what it feels like to go back there today and see the differences?

I'm not going to go into gentrification. Go look at what I said at Pratt Institute.

I saw you talked about Summerhill, the so-called "bullet hole bar," during the Michael Jackson block party... What's wrong with that lady? [laughs] It's what I've talked about before—people are moving into these neighborhoods with no respect for the culture, and that's a brazen example of it. Why would you think that bullet holes would be part of the decor? Why would you try to change the name of Harlem to SoHa or NoHa? Why would you do that? It's bullshit.

Do you feel that the city could be doing more to stem the tide of gentrification? We need affordable housing here in New York City. That's what it comes down to.

You had a movie come out recently about Rodney King, and it was announced this week that you'll be teaming up with Jordan Peele for a film about a black detective who infiltrates the KKK. Not that you've ever shied away from tough topics, but do you feel a special urgency to make political films right now, given all that's going on in the country? Yeah. Agent Orange has the nuclear codes

And does that impact your approach to filmmaking? It impacts my sleep. [laughs]. It's less peaceful.

One last question before I let you go. Whose side do you have in the Charles Oakley/James Dolan feud? I thought they had a truce. I'm just shaking my head.