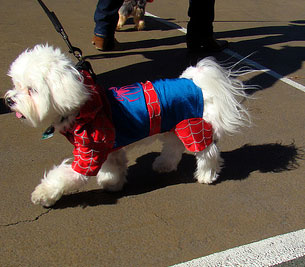 Forget The Dark Knight – the hype is already giving way to disappointment. It’s time to start getting really, really excited about Spider-Man the Musical, which will feature a score by U2’s Bono and the Edge and direction from Julie Taymor of Lion King fame. In May, Marvel Executive Peter Cuneo announced that the show could open as soon as next year, with Jim Sturgess and Evan Rachel Wood – Taymor’s stars in Across the Universe – playing Peter Parker and Mary Jane.

And yet, from the inbox comes news of an open casting call on July 28th for the lead roles! The casting agency says they are in still seeking someone to play Peter Parker, ideally a “male, 16-20’s, great rock voice, can be nerdy with understated sex appeal, good sense of humor.” For Mary Jane, you’ve got to be the beautiful girl next door type, with a strong pop/rock singing voice.

So it looks like Sturgess and Wood are going to have to work a little harder if they want to want to join the cast of what could be the greatest Broadway adaptation since Tarzan. Or could it be that producers have indeed already cast the show and are just holding this open call to get some free publicity? If so, you're welcome! Details on how to land your big break after the jump.

Directed by Julie Taymor, Music and Lyrics by Bono and The Edge of U2

WHAT WE’RE LOOKING FOR:

Please prepare 16 bars of a pop/rock song that shows range. Please bring sheet music. Also a photo/resume stapled together, IF YOU HAVE ONE. IT’S COOL IF YOU DON’T!