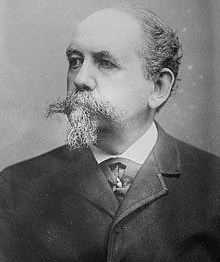 Just before Halloween, on October 25th, the Green-Wood Cemetery catacombs will open for a special after-hours party. Hosted by the New York Obscura Society and Samuel Ward McAllister ("the most elite and permanent resident of the catacombs"), the evening will bring you back to the Gilded Age, and as such will demand your finest cocktail attire. About your host...

"During the Gilded Age, a time of immense wealth, opulence and growth for the city of New York, one man held the key to the city's most exclusive gatherings: Samuel Ward McAllister. A self-appointed arbiter of high society from the 1860s to the early 1890s, Ward McAllister performed as an advisor in class and etiquette for the city's wealthiest families. He also kept what became infamously known as 'The Four Hundred,' a strictly maintained list of individuals who were lucky enough to be ranked amongst the creme de la creme of New York society and, amongst numerous other perks, receive invitations to Mrs. William Astor's legendary balls."

McAllister died in 1895 and was laid to rest within the catacombs of Green-Wood Cemetery, "a long, tunneled burial space embedded within a hillside that offered above-ground interment in its numerous vaults." Where his spirit still remains.

On the 25th of this month, you can drink cocktails alongside McAllister and other ghosts while listening to the sounds of the legendary Dandy Wellington and His Band. And more importantly, while enjoying an open cocktail bar. There will be gin, and there will be maze-like pathways to navigate after drinking it all. Tickets are $80, and this will probably sell out fast—buy them here.

#catacombs
#ghosts
#green-wood cemetery
#party
Do you know the scoop? Comment below or Send us a Tip