South Street Seaport Is Now One Step Closer to Redesign

The South Street Seaport got one step closer to getting a shiny new facelift when plans for a Pier 17 redesign were praised by members of the Landmarks Preservation Commission at a hearing yesterday. SHoP Architects' design for the new pier, which was well received by Community Board 1 last month, replaces the currently quite drab South Street Seaport Mall with a modern glass building topped by a rooftop lawn and a 600-700 seat concert hall, which would double as an open-air bandshell in the summer.

No official vote was taken at yesterday's hearing, but most of the commissioners voiced approval for the plan. "There is substantial support certainly for the demolition [of the current building] and for this design," said Chairman Bob Tierney.

But commissioners also worried that the all-glass building would be overwhelmed by all the signage from chain stores and restaurants inside, obstructing views of the water and Brooklyn Bridge and negating a major upside of the new renovation. In addition, several commissioners pointed out that plans for the pier didn't include a renovation of the Tin Building, the landmark remnant of the Fulton Fish Market that has been in disrepair since being gutted by a fire in 1995.

Pier 17 has been a stellar spot for summer concerts for decades—last summer, the Seaport hosted the 4knots Music Festival, but the Seaport's mall, which was built nearly thirty years ago, has struggled to become a real retail hotspot. SHoP Architects and Howard Hughes Corp., which is funding the renovation project, will readdress the concerns at an upcoming meeting in the near future, after which the commissioners will have the opportunity to vote. The project would begin construction next year if approved by the Landmarks Preservation Commission, as well as by the Department of City Planning.

It remains unseen if there will be a total overhaul of the retail shops and restaurants over there, but the beloved Pizzeria Uno seems safe, for now, as it's housed in the neighboring building. 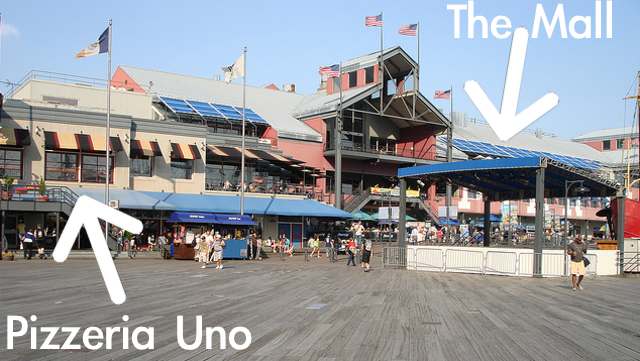 #landmark preservation commission
#pier 17
#shop architect
#south street seaport
Do you know the scoop? Comment below or Send us a Tip
A new Gothamist is coming! We’ve moved comments over to our beta site. Click here to join the conversation and get a preview of our new website.