Sotheby's Is Auctioning Off One Of The CBGB Awnings

Earlier this year we went on a mission to find all of the original CBGB awnings, speaking with everyone from old employees and bookers to the Rock n' Roll Hall of Fame. The biggest break came when former manager Drew Bushong reached out to tell us he snagged one of the awnings in 2004, after it had been discarded on the street with the trash. Bushong even dusted off the old thing and brought it back home for this photo: 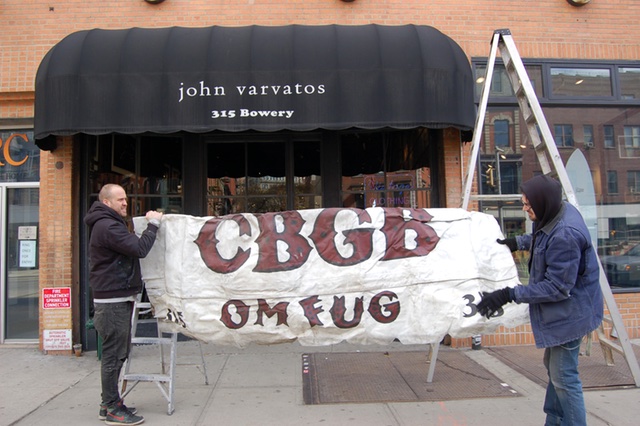 Now Bushong tells us he's ready to part with it (in exchange for some cold, hard cash)—he's put it on the Sotheby's auction block. It's listed as the original awning, but according to our research it's one of the later awnings. The first—which was hand-painted by owner Hilly Kristal—is long-believed to be held by Jody Foster's Army (JFA), who allegedly stole it after a show in the 1980s.

This is the theory held not only by Kristal, but various employees who worked the night the awning was stolen, and also the Rock n' Roll Hall Of Fame's Curatorial Director, Howard Kramer, who told us how he tried to get the band to own up to their "prank."

The awning on the auction block was installed "sometime around 2000," the club's old booker Brendan Rafferty told us, adding that "awning was taken down and replaced after being badly damaged... [it] was thrown out by Hilly, but 'rescued from a dumpster by a former CBGB employee.'" That former employee is Bushong, who now stands to get an estimated $25,000 to $35,000 for it. Maybe JFA will finally come forward... 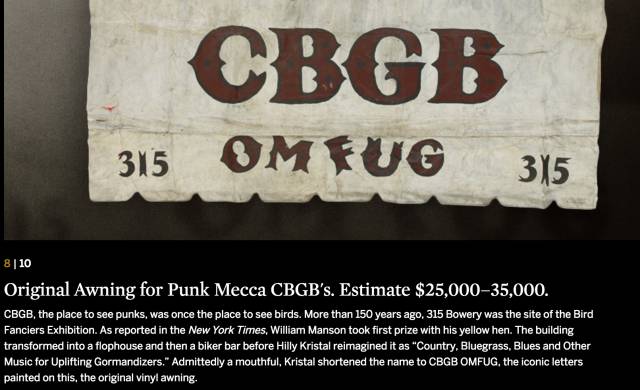 Definitely not the original, despite what Sotheby's claims.

We've reached out to Sotheby's regarding the claim that this is the original awning, and will update when we hear back.