Sopranos Series Finale: What Did You Think? 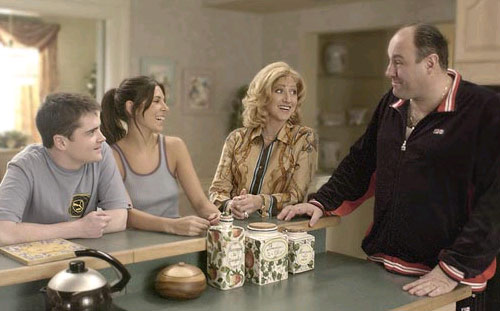 We've got a (spoiler-full) summary of the episode after the jump, but we want to know what you thought of finale:

And tells us what you think in comments!

Tony wakes up in the safe house. He and Paulie drive to the airport, where Tony meets Agent Harris. Tony tells Harris about a bank account he "suddenly" remembered that Christopher mentioned the Arabs having and also asks Harris if he can find out where Phil Leotardo is.

Tony drives out to the house by the shore where Carmela, AJ and Meadow are staying. Carmela is going crazy there, but they seem safe. It turns out AJ's friend Rhiannon is staying there too, and AJ says she's a junior in high school (!).

Everyone is eating after Bobby's funeral. The kids table is talking about the Oscars and Dreamgirls. AJ says everyone is fucked and they are living in a dream, quotes Yeats (for him, it rhymes with cleats) and rails against Bush. He says the American dream is fake.

Tony and the crew are in a safe house and discuss plans to find Phil.

Little Italy. A call to the NY crew from Phil Leotardo, who refuses to reach out to the NJ crew.

Tony visits the widow Janice with candy. He asks what's going and Janice mentions she'd like to give it a shot with Bobby's kids, saying she's gone through therapy and that she's a good mother. Tony suggests they form a new nuclear family and tells Janice he's there for her. As he heads to the van, Agent Harris calls Tony to tell him that Phil's call was traced to a pay found in Oyster Bay, Long Island.

AJ sits in a SUV with Rhiannon, listening to Bob Dylan. They start to kiss and Rhiannon climbs on top of him. Suddenly, the car starts to smoke and they scramble out. AJ parked the SUV on top of some leaves, and the car starts to burn and then explodes. Back at home, Tony and Carmela tear AJ a new one and tell him he's not getting another car.

FBI agent listening to a tap of Tony asking for a meeting with the NY crew. Cut to Tony meeting with Phil's people in a warehouse. They shake on an agreement, and Tony makes it clear he wants retribution since the NY crew killed his sister's husband.

Tony and the gang are back at the old office. Paulie doesn't like the cat they brought from the safe house.

Janice goes to visit Uncle Junior in the home. She shows him a picture of her daughter with Bobby and Junior thinks it's Janice. She tells him Bobby is dead. Later on, Uncle Pat, who was at the home, tells Tony that Janice was there and is after Junior's money.

AJ is with his therapist and says he feels free after the SUV blew up. The therapist says "Because it was a polluter?" but AJ is more amazed by how the act itself.

Paulie is at the Bing and is upset that Carlo isn't there for a meeting. He calls Tony and they wonder if Carlo flipped. Paulie also informs Tony that Jason Gervasi was arrested.

Hunter visiting with Meadow, and Carmela is shocked to hear to Hunter, who was kicked out of college, is now in her second year at medical school. It turns out the Sopranos are hosting the Parisis, what with Patrick and Meadow dating. Patrick reveals that Meadow a partner at his law firm and might get an offer, possibly with a starting salary of $170K and Tony and Carmela are shocked and thrilled.

The cat from the safe house is staring at Christopher's photograph; Walden tells Paulie that the cat does it all the time and Paulie is freaked out. Tony tells Paulie he wants him to captain the Cifaretto crew.

Another agent is looking for anyone who may have seen Phil Leotardo at a gas station, but the attendant says there are few stations with pay phones.

Tony is driving and sees AJ running. Tony sings the Rocky theme music. AJ tells Tony he's going to join the army. Tony shrieks, "Iraq?" to which AJ says, "Afghanistan." AJ explains he wants to learn helicopter skills so he can work for Trump at some point.

Tony is meeting with AJ's psychologist. Carmela says maybe the army would be great "if there wasn't a war going on!" She reveals AJ bought $250 of CDs to learn Arabic. Tony tells the therapist about his mother and how his childhood was terrible. It becomes a session.

Tony has dinner alone with Meadow. She explains why she wants to go into the law - she's seen her dad dragged away by FBI agents so many times, imagine how the rights of immigrants are abused.

Phil, in a velour tracksuit, is dropped off by his wife at a gas station. As he stands outside the car, telling her to go to the pharmacy, he's shot in the head by Walden. Patty Leotardo gets out of the car, freaking out, and it's still in drive with the grandkids in the back. The car's back tire runs over Phil's head, which makes a kid watching throw up.

Carmela and Tony talk to AJ about his army plans. AJ tries to convince them how he wants to be a liaison and how it'll help him later on, but then admits that Rhiannon doesn't think enlisting is a good idea. Carm and Tony list how AJ's had other plans before, including owning a club. They slyly convince AJ to consider working as an assistant to a producer - on a non-p0rn movie that Little Carmine will finance. They want him to have real world experience before investing in a club.

Tony's lawyer mentions the witness who flipped. Tony doesn't say much, but he is upset.

Silvio is in the hospital, probably ICU. Tony sits with Sil (the TV is showing "LIttle Miss Sunshine").

Paulie and Tony sit outside Satriale's. Paulie refuses to lead the crew, because everyone who led it has died prematurely. Tony is angry, and says that Paulie BS's everything, like about the cat. Paulie says the cat keeps looking at Christoper's picture, even after Paulie moved it. Paulie reveals Tony he's seen the Virgin Mary at the Bing, which Tony jokes about and says they could have made tons selling holy water or from a shrine. Tony finally says that, fine, if Paulie doesn't want to run the Cifaretto crew, he'll place Patsy in there. Paulie balks at that, acknowledging that Tony knows what to say, and agrees to run the crew. Tony leaves and Paulie goes back to sunning himself.

AJ leaves the film production office in a new BMW M3, proving that his parents will do anything to keep him from enlisting. He tries to justify the purchase of the car by saying it has good mileage on the highway and there's not public transport at the production office. He picks up Rhiannon from Montclair High School.

At home, AJ and Rhiannon are laughing a montage of White House officials doing stupid things and Carmela tells them they're going out for dinner. Tony rakes leaves in his lawn, happily looking up at the winter sky. Carmela tells him about their dinner plans and he says he needs to meet some people.

People means Uncle Junior. Tony asks if Junior remembers shooting him. He tells Junior not to leave his money with Janice, but with Bobby's kids instead. Tony then realizes that Junior doesn't remember him.

Tony arrives at the restaurant first. He looks at the different songs on the table jukebox, and ends up picking Journey's "Don't Stop Believin'." Carmela comes in and says AJ's on his way and that Meadow went to the doctor...to change her birth control. Tony looks like he didn't really need to hear about it. Tony tells her Carlo will testify. AJ arrives and Meadow, proving herself a terrible parallel parker, tries to park her car about five times. These shots are intercut with shots inside the restaurant, of her family and other customers sitting down and walking in. The many cuts back and forth (we'll count them later) build tension, until finally, Meadow parks the car and runs towards the restaurant. Tony looks up and then that is it. Hard cut to black for many moments (it almost feels like the cable went out). Then the credits.

#comments
#free
#Free Polls
#poll
#polls
#Take Our Poll
#television
Do you know the scoop? Comment below or Send us a Tip