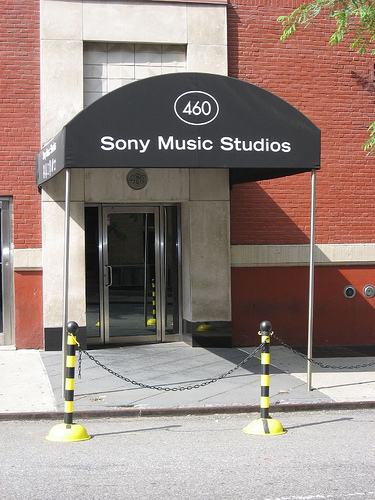 It's not just venues closing down these days, the latest real estate casualty is still music-related, however. AMNY reports that Sony BMG is closing its Hell's Kitchen studios.

Not surprisingly, the company alluded to difficult times in the recording industry when internally annoucing the five-story brick building (which resides on West 54th St and 10th Ave) will be shutting its doors this August. Employees received the memo on June 8th, also letting them know all jobs held in the building would be terminated. Yikes! It's possible that some will be offered transfers, however.

The building is pretty historic, prior to Sony's purchase of it in 1993, this is where Fox Movietone studios were once housed - meaning it was one of the first places to combine sound and film in the 1920s. "Miracle on 34th Street" and "Shaft" were even filmed there! More recently it was used for the "America: A Tribute to Heroes" bi-coastal telethon raising money for families of September 11th victims.

The building was mainly used for recording music after Sony purchased it (Jennifer Lopez, Kanye West and Christina Aguilera are amongst those who recorded there). In a 2001 interview, the studios' VP, Andy Kadison, told Mix magazine "We're like the millennium's version of an old-time Hollywood studio. We can do virtually every aspect of an entertainment project under one roof, ranging from audio recording, mixing, mastering, archive restoration and plant production, to television production and satellite broadcasts, to audio and video post-production."

AMNY reports that Kaslan declined to comment on this story, and that "the music-industry giant is being hush-hush on the deal, only saying that Sony BMG, the studios' parent company, signed a purchase and sale agreement with a New York developer called HSAC Corp. Efforts to contact the developer were unsuccessful. It was unclear what will happen to the building."

Guess this news will raise the bidding on this eBay auction to be a "Rock Star for a Day at the Sony Music Studios in NYC". Could a disgruntled future ex-employee be making some money on the side?