Flying above New York City in a helicopter can be a beautiful thing, until you look down and see that someone has stolen and is living your dream life in a bucolic cabin on a rooftop in the West Village. Is there anything more enviable in the real estate racket of NYC than a house on a regular old apartment building's roof? Sonnets should be written about this shit. Ballads composed and sung... from other, lesser rooftops. The dichotomy of country and city right there, together, and yet still so close to mass transit and Starbucks. From the safety of the sidewalk you'll continue to live on in blissful ignorance, seeing only this as you pass by the building on Greenwich Street:

From up above, however, you'll discover a picturesque cabin that looks like it belongs in a horror flick, or maybe a Lifetime Christmas special. Someone comes home to this. Someone comes up from the dirty city streets, kicks their shoes off, uncorks some rosé, and drinks it straight from the bottle while walking around barefoot in that fresh grass. 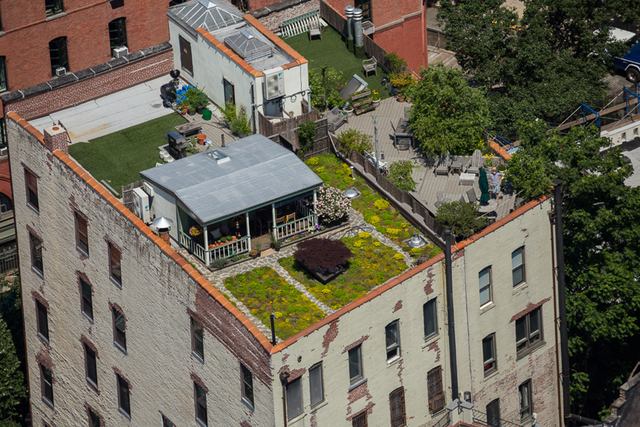 Photographer George Steinmetz spotted this beauty while on an aerial shoot—he told us, "I did some research on-line for rooftop gardens, and this was one of the more interesting ones." Let's zoom in... is that a dining table on the porch? Make it stop. 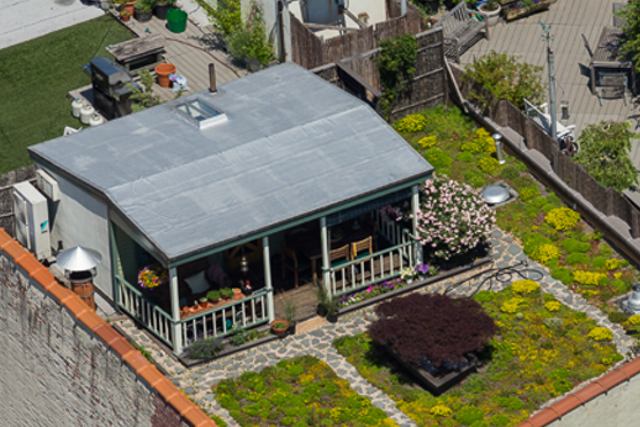 The rooftop—owned by David Puchkoff and Eileen Stukane—was explored by the NY Times in 2006. They reported back from their visit that "the porch is basically a glorified bulkhead over a hole punched in the ceiling of the family’s loft to make way for a nautical stairway that rises to a landing with a galley-like kitchenette, with two paned windows and a door that opens to the roof. Now, the couple don’t have to leave the city to hear the slam of a screen door, or watch a flock of mourning doves pecking for insects and seeds across the meadow."

We just finished drying our eyes after realizing someone lives in a cottage that looks over East 13th Street, and now THIS?

UPDATE: Here's video showing the roof, and how Puchkoff was able to build it out. [Thanks commenters, thanks a lot.]

#cabin
#real estate
#roof house
#rooftop
#rooftop cabin
#original
Do you know the scoop? Comment below or Send us a Tip