Some Suggestions For Your Labor Day Weekend In NYC

Are you sitting out the Labor Day exodus and enjoying the empty-ish city on the "last" weekend of the summer? Here are some options for when you're not at the beach or the park or in your perfectly air-conditioned content cave binge-watching all the stories.

Break out the beads, the big EDM festival is here for three days, starting Friday. Tens of thousands will be heading to Randalls Island so they can bounce and bang their heads to dozens of acts. There are still tickets available as of now.

Electric Zoo is at Randall's Island Park; Friday, August 31, Saturday, September 1 and Sunday, September 2; doors open at 3 p.m. on Friday and at 1 p.m. on Saturday and Sunday; tickets.

This is your last chance to see Yayoi Kusama’s stunning site-specific installation "Narcissus Garden" in the Rockaways. The work features 1,500 mirrored stainless steel spheres on the floor of an old train garage at Fort Tilden, a former active U.S. military base. MoMA PS1 explained, "The mirrored metal surfaces reflect the industrial surroundings of the now-abandoned building, drawing attention to Fort Tilden’s history as well as the devastating damage inflicted on many buildings in the area by Hurricane Sandy in 2012."

Bronx Speaks Day Party at the Bronx Museum of Arts

The Bronx Museum of Arts is celebrating the end of summer (😢) with their "Bronx Speaks Day Party," an "Ode to Hip Hop and Bronx culture." Presented by Bronx Narratives and Funknvibes, the gathering will include live performances (spoken word from Citoblank and drum set by Anthony Anderson, vocals by Iniko), guest DJs (like gem., BSTN, JOMERO, and SCAR), games, music, merchandise, food, and more. 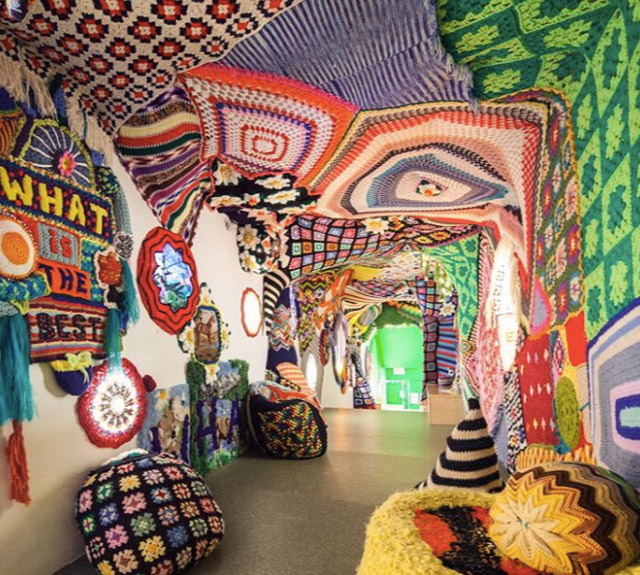 If you haven't made it to Governors Island this summer, then head over for the start of the Governors Island Art Fair, presented by 4Heads. Dozens of artists show their works, which are placed around the lawns as well as inside old homes and other buildings. Here's our guide to the Island, for further exploring.

Wigstock! at the Pier 17 Rooftop

Hester Street is surf and suds on Saturday. Vendors, like DownEast Lobstah, Lobster Joint, and Oyster Party, will be selling lobster rolls and other seafood options (lobster hush puppy, anyone?), while beers and mixed drinks will also be on hand from Round K, Hokkaido Brewing, and Old Blue Last. Landlubbers can try out dishes from Manju, Whammees, Stax, and Rosey Jamaican.

The city's most colorful and joyous celebration of Caribbean culture takes over Crown Heights on Monday, as hundreds of dancers, performers, and colorful floats energize the hundreds of thousands (or million!) revelers. There are actually a whole series of events—Brass Fest on Saturday, Junior parade on Saturday— leading up to the parade's 11 a.m. start time on Labor Day. Of course, people will also be celebrating J'Ouvert starting at 6 a.m. on Monday, with the year-old NYPD rules still in place.

Screening of "Madama Butterfly" outside the Metropolitan Opera

Want to end the weekend with beautiful tragedy? The Met's outdoor series ends on Monday with a screening of Anthony Minghella's 2016 production of the Puccini opera.

#events
#labor day weekend
Do you know the scoop? Comment below or Send us a Tip