Soar Above Central Park in a Balloon 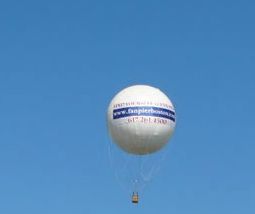 Central Park may be pretty from the ground, but the view from above will give New Yorkers a whole new perspective while taking in "the brilliance of the Greensward Plan, Frederick Law Olmstead and Calvert Vaux's 1858 design." The NY Post reports that starting tomorrow, helium balloon rides will be offered for just $25 a pop.

is the company responsible for the temporary attraction, and says at night the balloon will be lit up. Before illumination and the first take off, however, they had to acquire "a slew of permits, including one from the Federal Aviation Administration to enter New York's airspace."

The ride lasts about 10 minutes, so even if you discover a sudden fear of heights, the countdown to the ground will be a fairly quick one. The balloon will bring you and yours about 300-feet above the park in a wicker basket (the FAA won't permit them to go higher than 500-feet); four passengers join the pilot for the lofty jaunt, and it's all part of the 150th anniversary celebration of the park's original design.

Earlier this year The Balloon Project released a video containing aerial views of Central Park, it was filmed in January on a video camera that was attached to a set of helium balloons! Watch it here.