So Maybe I Participated In SantaCon A Little Bit My SantaCon ordeal began on the F train just after 12:30 p.m. on Saturday, when I encountered the first trickle of what would later become a deluge of red and white coursing through the streets of Midtown. There were perhaps ten of them, set apart as much by their absurd costumes as their abundant use of the term "fucking awesome." A half-hearted rendition of “Jingle Bells” broke out, and I marveled at the cleanliness of one impeccably groomed elf’s red Michael Kors bag. I knew that in just a few short hours the bag would be flung open, its contents spilling into a gutter as a man dressed as a Christmas tree violently made out with its owner against a dumpster. Most appalling to me was that she knew that, too.

There was some concern (or hope, depending on your perspective) that SantaCon wouldn’t happen this year at all—the backlash against the tradition had reached a fever pitch, and many bars (and neighborhoods) specifically vowed to turn away any afternoon partiers in Yuletide attire.

Rounding the corner onto West 33rd Street, it became clear that SantaCon would, like a cockroach wearing reindeer antlers, go on surviving despite these or any other obstacles thrown its way. Hundreds of Santas assembled outside a trio of neighboring bars, and I, together with Gothamist contributors Scott Heins and Jeff Seal, selected Feile as our first destination. Though the line stretched down the street, we decided to invoke entitled press privileges and push toward the front, where we were promptly waved in. “You don’t look like you belong in here,” the woman manning the line said, serving me what would surely be the nicest compliment I will receive this week. 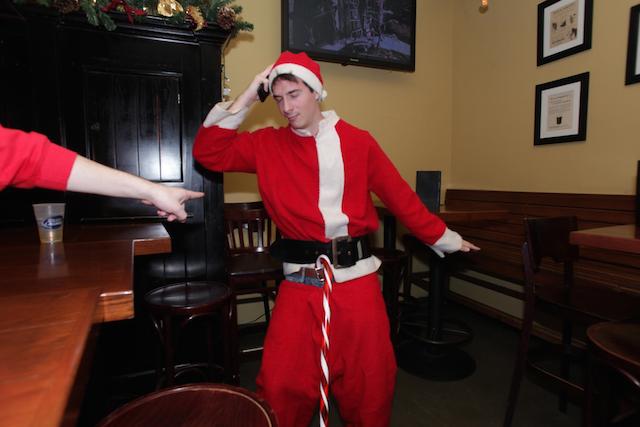 I probably hate SantaCon for all the same reasons you do, but let’s review anyway. Here are a few things I despise, in no particular order: Large crowds, Christmas, group singalongs, synchronized costuming, Midtown and anything that qualifies as Organized Fun.

Why would I agree to an assignment I was so vividly prepared to loathe? Perhaps because Gothamist offered me a free Christmas sweater for my trouble. Perhaps because I wanted to test my chops in preparation for an eventual career in war reporting. But more than likely, it’s because my editor asked me to, and I am too cowardly to say “no.” 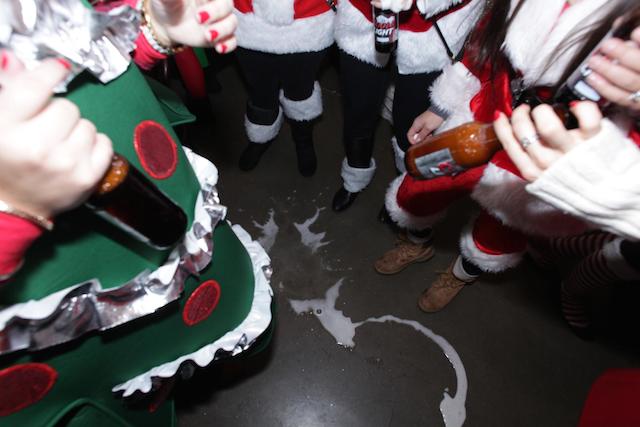 I realized with some horror upon entering Feile that I had actually been to this bar around two weeks prior, as it provided a convenient if depressing meeting spot for several friends flung around the city. Worse, we’d actually managed to get ourselves kicked out after one member of my party violently shattered a set of salt and pepper shakers by smashing them together.

Compared to the bad behavior displayed by my own crew, the Santas more resembled a knitting circle convening after a particularly inspiring mass. I had a lovely conversation with a pretty, unseasonably tan school counselor from Long Island about how gratifying her job was, and she told me how thrilled she was about how SantaCon benefitted Toys For Tots. We were in the wrong place. I downed a shot of Fireball and headed to Red Room, lured by the SantaCon app's promise of a clubby atmosphere and midday dancing. 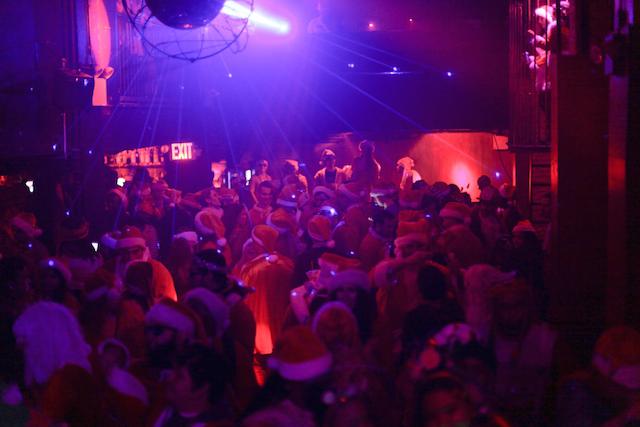 From the outside, Red Room looks like the sort of place where people once bet large sums of money to watch rats fight to the death, though its interior is large enough that the possibility remains distinct. “You gotta get in line,” the bouncer sneered, pointing over his shoulder. There was no one there. “Well, there is no line,” he conceded. “But you have to go around the rope.”

Having successfully performed the required rope ceremony, we entered a concrete hallway where there lingered a handful of Santas, smoking cigarettes through increasingly distressed beards. Bass pulsated through a steel door, which swung open to reveal a windowless, steaming dance floor, on which hundreds of Santas, elves, reindeer and the occasional Holiday Shark gyrated and sloshed $10 mixed drinks. Two go-go cages were suspended above the floor; in them, scantily clad Santettes grinded (ground?) on one another’s velveteen skirts. “WHERE ARE WE GETTING COCAINE?” one Santa shouted to another. It was 3 p.m.

SantaCon from Gothamist on Vimeo.

Earlier Scott had jokingly suggested that I try out some of the emetic pickup lines listed in the app. (SantaCon organizers said they later removed some of the more questionable among them.) If ever there was a venue to ask if someone "wanted to get sleighed," this was it. I walked up to a man dressed as an elf, somehow taking in the spectacle through sunglasses. “Hi,” I said, hoping to appear drunker than I was. “I see you when you’re sleeping—and you don’t wear any underwear, do you?” Panic immediately seized me. “That’s a pickup line suggested by the SantaCon app,” I stammered to explain. “Would it...work on you?”

“Yes,” he said, lowering his shades. We both turned to gaze at the cages, one of which was now occupied by a Santa in a fireman’s hat slowly peeling off his clothes. “Great,” I said, quickly hopping away.

I tried the line a few more times (“Why don’t we just start with your name?” a man in a red blazer asked pityingly), as did my friend John, who asked a man named Danny whether he “wanted to see his 12-inch elf.” “I’m going to be nice about this because it’s Christmas,” Danny responded pleasantly.

The place shut down at 4 p.m., which was fine by me, as I was beginning to run out of Santa steam. We would never hit all the bars, though it seemed remiss to skip Rick’s Cabaret, the sole participating strip club. 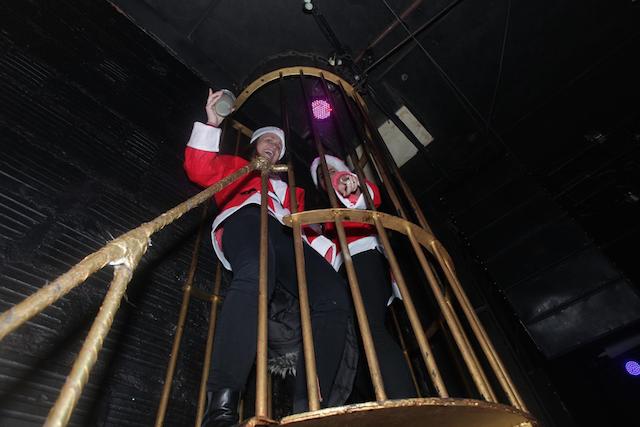 Compared with the debauched scene unfolding in Red Room, Rick’s seemed downright arcadian. Chairs were arranged helter-skelter around the cavernous space, and groups of friends (the majority of whom were female) clustered to chat and sip Coronas. The holiday spirit was alive and well in Rick’s, with wreaths, Christmas lights and sumptuously wrapped packages appearing at every turn. A tasteful pine garland unspooled around the banister of the stairs, probably the same one the von Trapps used to decorate their own home.

The whole set-up might have resembled the lobby of a somewhat louche Marriott if not for an octagonal platform in the center, where a topless woman accepted dollars into her g-string and seemed generally amenable to having her flank stroked by a couple holding hands. We watched as a woman (in a Santa costume, it should go without saying) received a lap dance from a comely stripper with flowing brown hair and liquid eyeliner. Upon completing her routine she stood up, yanked her own red Santa suit back over her nipples and sauntered away, leaving us to wonder whether she was, in fact, an employee of Rick’s at all.

I asked one man, a 26-year-old computer programmer from Philly named Tony, what he was doing there. He shrugged. “This was the shortest line,” he said. 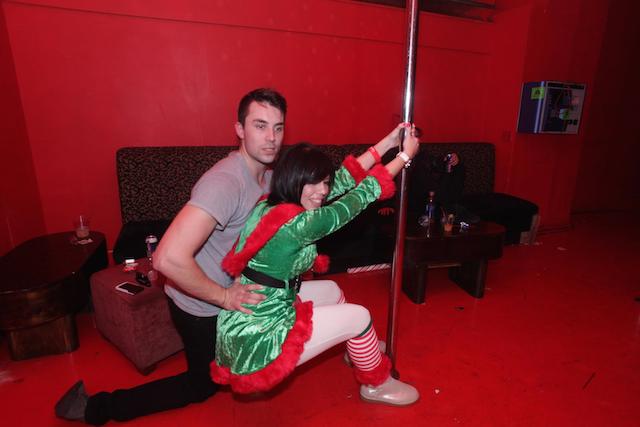 Summoning the last of my remaining energy reserves, I walked around the corner to another set of participating bars: Rattle N Hum and Nelly Spillane’s were both stamped SantaCon approved, though only Rattle N Hum had a line, roughly a dozen tottering Santas deep.

As with before, I asked the bouncer if I could cut in the name of journalism, but a man at the head of the line, defined primarily by his red flannel shirt, worn without a jacket despite the bracing cold, and his eyes, which were angled in two drastically different directions, had other ideas. I asked how long he’d been in line. “Longer than you,” he managed to growl, an impressive riposte from someone engaged in a clearly losing battle against containing his own drool. His female companion sidled up. “Peggy is trying to hit on that cop,” she told me conspiratorially. Behind her, a woman in a short Santette dress leaned saucily on a patrol car. “If you knew Peggy, you’d know what a bad idea that is.” I was so glad I didn’t know Peggy.

We retreated to Nelly Spillane's in the interest of peacekeeping, which was warmly lit and largely empty. I was joined by a few friends, and we turned our attention to an MMA bout gearing up to start on one of the TVs. The combatants were a Polish woman and a Brazilian woman, both in their mid-twenties, neither of whom you would ever want to encounter in a dark alley or well-lit boxing ring or a Duane Reade or carwash. The Brazilian boasted more formidable muscles, but her fearsomeness was offset by an open, friendly face. The Pole was smaller and more sinewy, but there was something in her icy gaze and erratically braided hair that made her appear deeply sinister and soulless, like Gollum dressed in moisture-wicking white spandex.

The ensuing fight was vicious, and for a minute, it looked as though the Brazilian would win handily. But the Pole fought hard. By the time she was declared the victor a few horrible minutes later, it was hard not to connect her with the Santas still lurching around outside: Glassy-eyed, her once crisp white outfit steeped in red, drenched in gallons of blood and tears and sweat. But still, she stood. Like the Santas, her ability to remain upright was inspiring. Not so inspiring:

After Nelly Spillane's, I decided my tenure as “Official SantaCon correspondent” was officially over, but what did that really mean? SantaCon promised volcanic levels of violence and vomit, but I saw none of those things. Mostly I saw lots of bros being bros, but what did I expect when I came to party in Midtown? You don't go to a cocktail bar and order a Schlitz. You don't go to a car dealership and ask for a sex swing. You don't go to a public restroom in search of a Cartier tennis bracelet.

I retreated to the East Village, still in my sweater, where I ordered another of round of restorative Fireball shots. As I glimpsed myself in the bar's mirror, it hit me: To the outside world, there was nothing separating me from the rest of the assholes. Would shedding my Christmas sweater and increasingly severe Fireball habit change me back to who I was? Or worse—have I been one of them all along?

#midtown
#santacon
#santacon2014
#original
Do you know the scoop? Comment below or Send us a Tip