SNL and 30 Rock Take it to the Stage 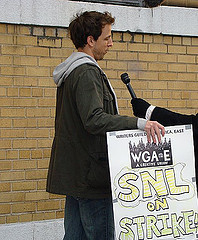 First amNewYork outs the secret bars around town, and now the NY Post is revealing the up-until-now secret shows happening soon at UCB. The casts of 30 Rock and Saturday Night Live, both taking part in the WGA strike (as the actors are also writers), are bringing their shows to the stage. Each will perform new episodes live, in the small 150-seat theater -- 30 Rock on Monday the 19th and Saturday Night Live on Saturday, of course.

the stage version of Saturday Night Live has been kept something of a secret. It's not clear who will get a chance to buy tickets and when they'll be on sale. The guest host will be Superbad star Michael Cera, sources told The Post.

to host by SNL and UCB member Amy Poehler and won't be meeting with the cast until a few hours before the show! Good thing he has an improv background. Alas, it appears advanced reservations have been filled, however we'd suggest keeping an eye on the venue's site. A limited amount of tickets for 30 Rock will be available at the door the night of (getting in line now wouldn't be a bad idea). Each show is $20, with proceeds going to the Writers Guild strike fund -- and according to John Oliver, they sure could use some snacks down on the picket line.