Brooklyn Bridge Park has built up rather quickly since opening in 2010, and they're still rolling out new features from pier to pier. Most recently, they've been working on The Environmental Education Center and an annex of the Brooklyn Children's Museum all the way on the DUMBO side; and at the other end, Pier 6 has been given some new plant life in the form of a flora-filled field.

Meanwhile, as the Squibb Park Bridge remains closed, a new bridge has been installed near John Street. This bridge—which isn't open to the public yet—is meant to "show visitors how the tides come in and out through the day." Click through for a look at these latest features in the park; and proceed here to see some before and after shots of how the BBPC Brooklyn Bridge Park Corporation has transformed the area.

According to the NY Times, the Pier 6 additions include "profusions of swamp milkweed, rose mallows and cardinal flowers," and red and purple flora "which stretches for 1.3 miles along the East River." Regina Myer, president of the BBPC, pointed out that the natural beauty now on display is on top of "a concrete deck in the middle of the East River" (SEE IT). 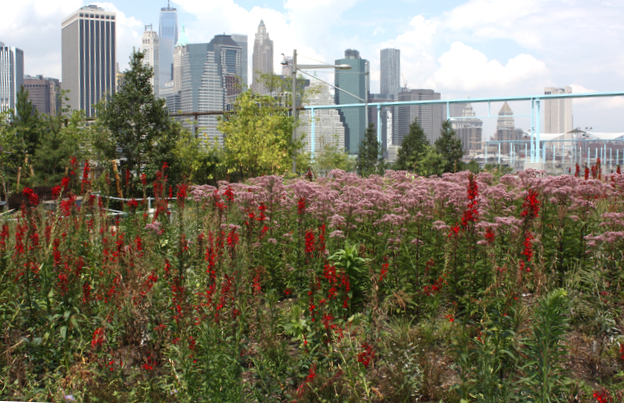 #BBPC
#brooklyn bridge park
Do you know the scoop? Comment below or Send us a Tip