Smokers Strike Out at Shea 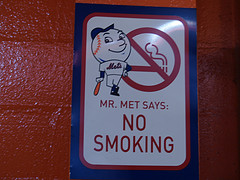 Smoking sports fans beware, Shea Stadium is cracking down on the nicotine set this season. While the Smoke-Free Air Act has been in effect for 13 years, security at the stadium has turned a blind eye to those lighting up -- but that's all changing. The Observer reports on one fan's encounter with the new guard:

“A security guard told me I can’t smoke and then ripped off a piece of my ticket,” the 26-year-old fan from Deer Park, Long Island fumed. “If they were going to take away my season tickets, I wouldn’t dare try to sneak a cigarette. But if they’re just going to keep giving me warnings, then I’m going to keep smoking.”

This marks the first season in 44 years that the law is being enforced in the ballpark. Another fan chimes in on how things worked in previous years, saying smoking by the ramp outside and away from seated fans was always "the rule". However, last month this press release showed up on the team's site, saying, "The New York Mets today announced that Shea Stadium will become smoke-free during the Mets' final season in their longtime home. The 2008 smoking prohibition will encompass all areas within Shea, including the ramps."

So why is this all happening now? In an effort to get fans prepared for the move to Citi Field -- the sanitized new home of the Mets, where smokers won't stand a chance. Time to buy some Nicorette! And you might as well quit drinking too, Shea just raised their beer prices to 8 bucks.