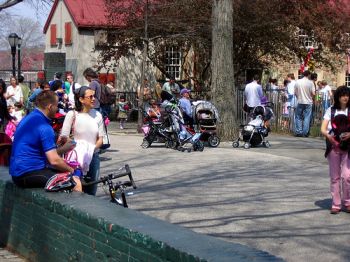 Is Park Slope ready for its close up? The Post is reporting that the 'nabe may be getting the Star treatment, that is...the Darren Star treatment. He's "teamed with Sony and NBC for a proposed series about a group of affluent characters who live in the upscale Brooklyn neighborhood."

The same execs of the yet-to-be-titled show also brought Sex and the City to the small screen, a series that Brooklyn-bashed throughout its lifespan. Post-Carrie Bradshaw, however, the area has become a bustling hot spot for the 30s-crowd, stroller pushers, complaining neighbors, yuppies and even the occasional hipster.

The show's script writer, and Park Slope resident Sue Kramer, says it's slated to be "an hour-long dramedy. It takes place in Park Slope and Park Slope is one of the characters in it. Park Slope has so much juice, just like Manhattan. It's got a lot of pizzazz and energy." She's got plenty of fodder to work with, from Strollergate to the much buzzed about sex toy shop moving in.

If it gets the green light, expect it to hit airwaves by next year. Residents of the Slope have mixed feelings, CB6 member Craig Hammerman is thrilled and envisioning shots "of the Soldiers and Sailors Arch at Grand Army Plaza, and long views of the stores on Fifth and Seventh avenues." Meanwhile, some locals fear the show taking over their street, Law & Order invasion-style.

#brooklyn
#darren star
#park slope
#sex and the city
#stroller mafia
#strollergate
#television
#tv
#yuppies
Do you know the scoop? Comment below or Send us a Tip