Slangs Of New York: 19th Century Vocab Worth Bringing Back

Ever think our modern slang leaves a little something something to be desired? Between LOL-worthy emoticons and obvs totes irritating abbreviations, sometimes it doesn't seem like our generation is really adding much to the English language (sorry about making "Googling" a verb, future generations!). Then again, we don't even have to come up with anything new—not when we can just re-appropriate some now-forgotten 19th century gems!

Inspired by BBC America's Copper, a gripping new cop-drama series set in 1860s New York City from Academy Award®-winner Barry Levinson and Emmy® Award-winner Tom Fontana, we decided to look into some of the more interesting turns of phrase used by many New Yorkers of the time. And were they ever creative with their cussing. Plus, stick around for an exclusive Copper trailer!

We hope all of these words show up on Copper! (BBC AMERICA/Cineflix (Copper) Inc.)

We came across the excellent Vocabulum, Or, The Rogue's Lexicon: Compiled from the Most Authentic Sources, an 1859 volume of gangster slang written by George W. Matsell, the Special Justice and Chief of the New York Police at the time, for the National Police Gazette. And damn if those Bens of New York's old underworld didn't know how to turn a phrase. We're totally going to be using these words. For example, what lady wouldn't like to called a "shakester?" As in "check out that the fine shakester over there." 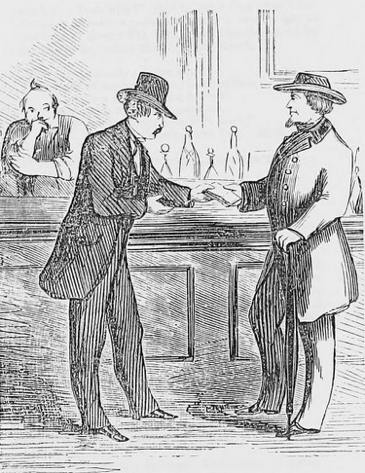 An original illustration from the Rogue's Lexicon.
Lots of words and phrases in the book still have the same meaning—a "crib" was a person's home then too, the police have always been "pigs"—but there are quite a few whose meanings have slightly shifted as well: To "break a leg" then wasn't something you said to an actor about to go on stage—it was what you called seducing a girl (which is why, we guess, mothers of children born out of wedlock were called "ankle" and "broken leg"). And while to "croak" still meant to die, newspapers at the time were also called "croakers."

Another example: Thanks to Mario Puzo most of us think of a "Godfather" as the head of a mob, or the "mobility" in 1859 talk, but back then they were something entirely different. Godfathers were "jurymen; so called because they name the degrees of crime as to grand or petit larceny, etc., etc."

Here are ten words and phrases we'd like to see make a comeback—drop ones you think are "red" in the comments!

We should point out there are whole classes of words we've left out including the many, many words they had for various types of money (including "Balsam, Beans, Blunt, Boodle, Brads, Brass, Can, Caravan, Case, Century, Chink, Chips, Darby, Dace, Dews, Dots, Finniff, Gelter, Hogg, Jack, Magg, Moiety, Much, Ned, Ochre, Rag, Red, Rhino, Slum, Spark and Poney), booze (including, for gin alone, "Max, Sky-Blue, White tape, White Velvet" and if it is bad "Blue Ruin") and loose women (we'll let you find those on your own)!

Intrigued about more slamkins, corinthians and scrub-bados? Be sure to watch BBC America's Copper, a gripping new crime-drama series set in 1860s New York City from Academy Award®-winner Barry Levinson and Emmy® Award-winner Tom Fontana. Watch the series premiere of Copper Sunday, August 19 only on BBC America. For more updates on the series, be sure to like Copper on Facebook.