Six Nearby Corn Mazes To Get Lost In This Fall Navigating fall can be challenging. Should you bring a jacket or a sweater? Iced coffee or regular? Does denim clash with flannel? Seriously, it's dark ALREADY? The myriad decisions one has to make can leave this season feeling a bit, ahem, labyrinthine. And so, in celebration of #peak fall over the next couple of weekends, we present to you six corn mazes close to New York City.

Note: There are no haunted corn mazes on this list. We’re freaked out enough just being around nature to begin with.

This corn maze is literally a maze in the shape of the face of hometown hero Jax. Jax, for the uninitiated, came in third place during the last season of American Idol, showing a range of talent, singing a mix of Beatles hits, Britney Spears, and even Adam Sandler. By the end of this maze, we felt like we knew Jax. Guided by trivia questions (you can choose from entertainment, sports, or history) the answers of which help guide you in the maze, a maze-venturer can enjoy a relatively stress-free jaunt, enjoying the beautiful central-Jersey air while wandering somewhere near Jax’s baseball hat. Extremely enjoyable.

VonThun Farms also has a bunch of other family-friendly activities including hayrides, a pumpkin patch, and pick-your-own apples. The highlight however, were the fried pop tarts. We regret nothing. 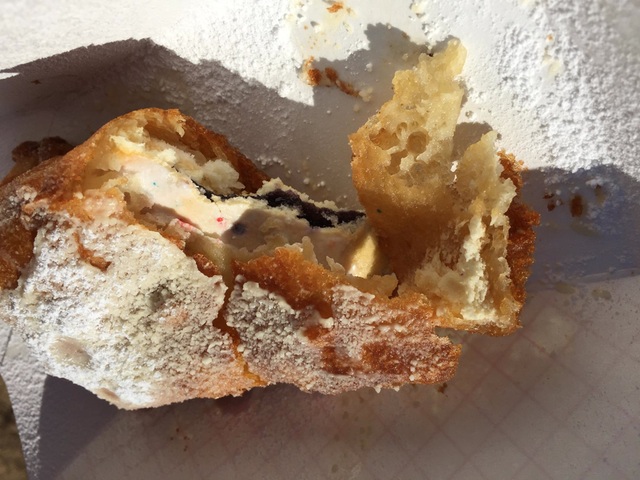 Etsch farms has been in the hands of the Etsch family since the 1930s, so it’s only fitting that their maze celebrates the importance of family farms. Greeted upon arrival by the matriarch of the clan, Caroline Etsch, Gothamist was quickly treated to delicious apple cider slushies and sent on our way through the maze. Certainly a bit more freewheeling than others, the Etsch maze has a somewhat spooky edge to it, complete with tombstones and a pumpkin graveyard. There’s also a crossword puzzle maze-venturers can complete, but we’re still looking for six down. We think it’s “scarecrow,” but we can’t be 100% sure.

Wightman’s Farm maze was by far the most difficult of the mazes Gothamist attempted, but that in no way detracted from our enjoyment of it. Thing is, if you stray from the map, you’re going to pretty much end up where you were five minutes ago, and we learned this the hard way. Battling against the sunset, we staggered through the maze, collecting lost souls along the way and leading them back to safety (the farm stand).

There’s also a very cool observation deck in the center of the maze which offers a view of the beautifully maintained corn. There’s definitely a “Children of the Corn” vibe to the maze, but not in a bad way. We promise.

Queens County Farm Amazing Maize Maze, Queens, NY
Maze Theme: None. Was Pizza Rat too much to ask?
Maze Obstacles: The possibility you’ll accidentally exit the maze in Nassau County.
Night Maze? Yes! But you missed it; it was last weekend, sorry.

The only maze in New York City is sponsored by Con Ed (because an amusement is not NYC-official until it has some level of corporate sponsorship). The exhaustive Queens County Farm maze is both fun and convenient, and is the only one on this list that can be reached by public transit. The maze design is freewheeling, chaotic, and angular, a bit like the borough it calls its home. On the 24th and 25th of October, be sure to check out the Haunted House.

This is the one. While other corn mazes are stuck on farms that are devoted to other activities, like growing food or raising livestock (you know, boring stuff), Stony Hill goes pretty much all-in for the maze. This year’s theme is Knights and Dragons and looks pretty badass: it features a large number of bridges (always a plus) and even has a video explaining how best to tackle the maze. There’s also “Maze Masters” who will help you out if you get hopelessly lost. They’re so serious, they even produced a sweet video promoting this year’s maze.

Bad Apple isn’t a fruit, so don’t go looking for some lesser apples to make into applesauce. In this case, Bad Apple is a pretty badass truck that lives on Barton Farms. According to the Barton Orchards website, the truck “has suicide doors, a 16" pneumatic Kelderman lift, road armor bumpers, American Force Wheels, and extreme K&S powder coating.” Righteous. In its honor, the maze this year is in the truck’s image. Rumor has it that if you don’t get out of the maze by closing, the truck hunts you down.

#autumn
#corn
#corn maze
#fall
#mazes
#original
Do you know the scoop? Comment below or Send us a Tip