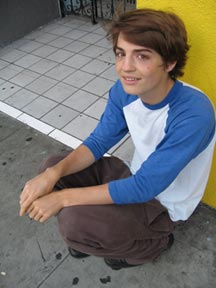 At 22, Simon Rich is a comedic force to be reckoned with. A Harvard graduate with a debut collection of short humorous pieces

published by Random House, dubbed, "Hilarious" by Jon Stewart. He'll be reading at the KGB Bar on June 24th. Seeing him read now will be like seeing Jerry Seinfeld at an open mic or seeing The Beatles when Pete Best was the drummer. Audience members will be later be able to say, "I saw Rich in a tiny bar in NYC!" And mouths will drop in awe and eyebrows will furrow with jealousy because Rich will be, in the future, on the forefront of hilarity.

You touch upon the theme of justice in your book and I wanted to know, when was a time when you witnessed a great injustice?
I was walking through central park and I saw a horse drawn carriage. The horse was going around the park, carrying these people around, who seemed like perfectly nice people. There were cars on either side of the horse and I thought, "What if the horse knew what these cars were? What if it knew there were these machines that can move people around without feeling constant pain. How angry, frustrated, and confused would this make the horse?"

You have a piece about the craziest day for a child being the day that he learns the truth about The Silent Game. What's an example of a time when you learned a truth that shook your world?
The piece about calculators is definitely a true-life experience. I was very shocked and frustrated when I found out there was this machine that could magically do every mathematical operation that I had been struggling with and trying so hard to learn how to do. That the teacher had withheld this machine from us for the first years of my schooling really blew me away. I was just flabbergasted. Also, I was really shocked when I found out that my mom was paying my doctors to give me shots. That blew me away.

Another theme is the disconnect between how things appear to be and how things are in reality. When was a time that this happened in your own life?
I'm a very gullible person and a lot of times I'll realize that I'd been tricked. That piece about the US Army, for instance, is definitely based on how when I was growing up and I'd see the US Army commercials and it looked like the coolest things in the world. There were lots of awesome images of guys planting flags on mountains and it looked like something I'd really like to do. But as I got older I realized that I shouldn't trust my first impressions.

Have you ever done any sort of performing?
I tried to. In high school I did some stand up comedy because I thought that that was the only way to make the kind of jokes that I like. When I was in high school I thought if you wanted to write jokes it had to be like The Onion or the stuff in Shouts and Murmurs.. I'd watch Kids in the Hall and The State and always loved it, but I thought if you were writing jokes like that you'd have to perform them. It wasn't until I started reading the Harvard Lampoon that I realized that you could actually get away with writing this stuff down and didn't have to learn how to be an actor to make jokes. That was a huge relief!

How are you getting the word out about Ant Farm?
My mom's doing most of my promotion. She goes to Barnes and Noble, looks for where the book is, and takes it from the spot where it's supposed to be and moves it to a more common place in the hopes that more people will see it.

What's your strangest "only in New York" story?
I was once walking by NYU and I heard a loud female scream. I rounded the corner and I almost screamed too because there were about a dozen human corpses on the ground. I was terrified until I realized that it was an NYU protest where everyone was pretending to be dead. It was called a Die-In.

Which New Yorker do you most admire?
My friend Dan Selsam. He lives in Manhattan and he's always going to China Town, bringing me with him, and making me try types of food I normally wouldn't try. H really gets the spirit of the place.

Given the opportunity, how would you change New York?
I'd try to do something about that New York City Smell.

Under what circumstances have you thought about leaving New York?
Definitely after seeing The Day After Tomorrow. That part where the waves crash down and the whole place was flooded. That was terrifying. I don't think I could ever really leave for any long period of time unless it was something of that magnitude.

What's your ideal day of recreation in the city?
I wasn't here for it because I was at school, but all of my friends who live in the city said that the greatest day, and the day they make fun of me most for missing, was the blackout. It sounds like an awesome, city holiday. Free, melting ice cream sounds like a blast.