"Sicko" Trip May Get Government Check Up 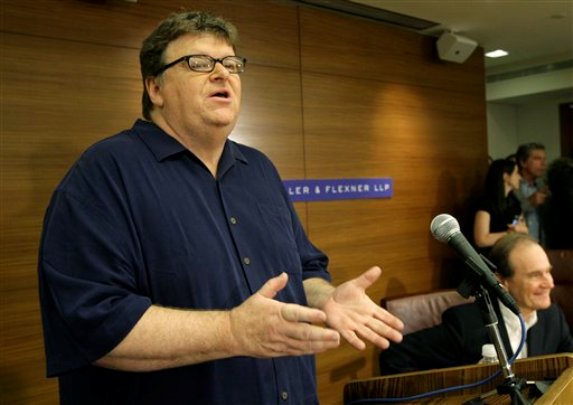 Recipe for a Cuban Molotov cocktail: Michael Moore, Harvey Weinstein, a documentary about U.S. healthcare and a federal investigation. No need to mix, because it'll stir into a frenzy on its own.

Documentary filmmaker Michael Moore and his distributor, Harvey Weinstein, appeared at a press conference yesterday to question why the government is investigating Moore's trip to Cuba for his upcoming film, Sicko. The film, which premiered at Cannes and is scheduled to open in a few weeks, questions the American health care system and, at one point, Moore takes three September 11 rescue workers to Cuba to get health care treatment for them there.

Now the Treasury Department is investigating the trip, saying it may have violated the trade embargo. Enter Moore, Weinstein, and lawyer David Boies, who spoke to reporters yesterday. From the Hollywood Reporter:

"We're prepared to go to court to stop this discriminatory attack," Boies said in his Midtown Manhattan conference room. "We view the actions taken as a form of harassment."

...Boies' letter cited the Cuban Assets Control Regulations allowing for "travel-related transactions directly incident to journalistic activities in Cuba." It did not address Moore's role in bringing the patients to Cuba, but Moore said that "subjects of the work of journalists are transported by (journalists) all the time. We were acting not just as journalists but as human beings (to help) rescue workers. ... Take off your journalistic hats for a moment -- does this upset anyone?"

..."In my 25 years in the movie business I've never seen anything like this, where the government has tried to impact a movie like 'Sicko,'" Weinstein said.

...When asked whether he and Weinstein were capitalizing on the government's actions for promotional value, Moore sarcastically replied, "Bob (Weinstein) and Harvey did call Mr. Bush and ask them to investigate us." He added, "It's an odd thing to accuse us of. We were going to open this movie quietly, and then to receive a letter like that. ..."

It is mighty interesting that the press conference was yesterday; there's a May 15 Entertainment Weekly interview that mentions Moore being investigated. Anyway, Moore said he sent a negative of the film to Canada in case it gets seized by the U.S. government. (Question: Does Canada like Moore after Canadian Bacon?)

You can see the Sicko trailer here. And a public school class trip to Cuba is being investigated by the Department of Education; no word on whether the Treasury is getting involved.

By
Ben Yakas
Seeking relevance and new audiences, NYC ballet companies embrace diversity
By
Precious Fondren
Black History Month 2023 in NYC: What to see, hear and do
By
Ben Yakas
Hear the New York Philharmonic play gorgeous Chinese music and more things to do in NYC this week
By
Steve Smith
Never miss a story