Should Our Subway System Have Etiquette Signs?

One real, one parody, both effective.

Outside of our city limits, SEPTA (South Eastern Pennsylvania Transportation Authority) has become the latest to respond to rude mass transit passengers by introducing "courtesy campaigns designed to restore a molecule of civility on the train or bus." Their "Dude, it's rude!" campaign may have even inspired NJ Transit, which may introduce a similar campaign.

This isn't rare, campaigns like this exist in Paris and Japan, and similar signage has also popped up Underground and up in Canada.

While we've had illegal parody signs briefly make an appearance here, and there are allegedly MTA-sanctioned "Courtesy is contagious" signs out there (though we've never seen one), we don't have a big etiquette campaign in our subway system. Anymore, at least—we used to have a fantastic one!

With 8.5 million customers daily, there are plenty of subway etiquette offenders out there, and our inbox is proof—we get plenty of photographic evidence of wide leg spreads, pole hugging, seat hogging, banana peeling, and worse. Couldn't we benefit from some etiquette signs? 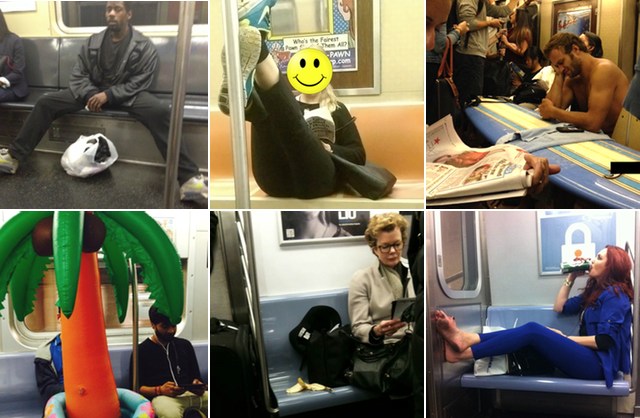 We happened to ask the MTA about the possibility of a subway etiquette campaign last week, but they didn't seem as excited as we were about it—spokesperson Adam Lisberg said, "You can go back in history and see old examples of etiquette posters here and elsewhere. People literally never learn. If systems all over the world have been trying and failing to curb bad behavior for decades (somewhere I have a photo from the Tokyo subway with Muppets urging straphangers to fold their newspapers), why do we think we would suddenly discover the magic bullet to get people to change? And if that’s not going to happen, I’d rather use the space to warn people not to get killed on the tracks."

It couldn't hurt, though—if someone was going to break unwritten subway etiquette law and saw a sign shaming them for their actions, wouldn't they think twice? We optimistically choose to believe they would.

The MTA's Kevin Ortiz did leave us with some hope, saying, "It’s been done in the past and I’m sure there will be one in the future." When we inquired about whether they would be willing to accept design submissions for a campaign, Ortiz said, "Any public information campaign would look like our other campaigns."

#campaign
#MTA
#subway etiquette
#original
Do you know the scoop? Comment below or Send us a Tip