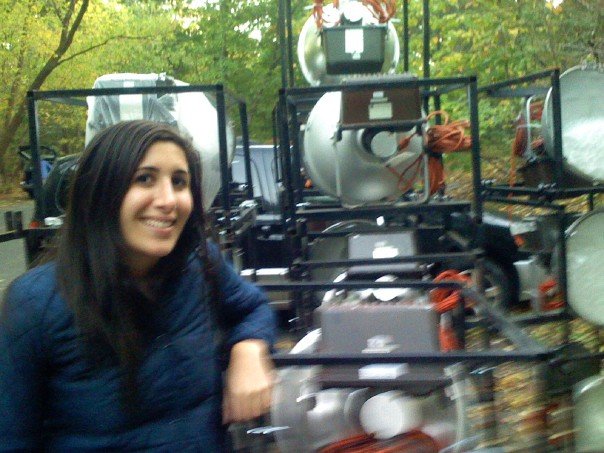 NYC TV's New York Noise just returned with a slew of new episodes for their 8th season. The show has been on the air for 4 years, having quickly become an institution for music fans and a place for bands (local and otherwise) to showcase their videos.

This season promises a mix of new and old, with everyone from Yeasayer to Les Savy Fav popping up throughout in unique sonic-driven segments. We recently got some off-air answers about the show from creator/editor/producer/superwoman, Shirley Braha. You've probably seen her at a concert or two.

How long have you been involved with New York Noise? I created New York Noise during a summer internship at NYC TV before my senior year at Smith College- summer of '03. I've been producing and editing the show since.

How many bands submit their videos to you in any given month? I usually receive 2 or 3 packages a day, but I didn't get any today so I silently wept under my desk. Everyone was like, "OMG, What's wrong?" and I'm like, "Nothing, I'm just under a lot of pressure you guys, you wouldn't understand."

Is there one video in particular that has stood out in the past, and one right now? This question is too hard. I think on technical and artistic merits, the new Hot Chip video for "Ready for the Floor" is really amazing. There are a handful of other new videos i really like now, mostly cause the songs are awesome: Evangelicals "Midnight Vignette" (I danced to this last night after everyone left the office); King Khan "Waddling Around"; Jeremy Jay "Airwalker"; Love of Diagrams "No Way Out" (PS- I have 677 other videos on my hard drive).

Do you have a favorite segment? And episode? Right now I feel like one of those people who call every movie their "favorite movie." There are 77 episodes of New York Noise so far, so it's hard to pick favorites. I like some of the weirder stuff.... Adam Green Variety Hour; Blind Date with Nicole Atkins & J from The Cloud Room; Eugene Mirman giving out fried fish; Fischerspooner fighting with each other; Beirut 'Making the Video' parody; My Super Sweet Bar-mitzvah; Siren Fest 06 hosted by a pageant winner; Antiques Rockshow; Battles in Band Therapy; anything with MC Steinberg. I archived some of that old stuff on YouTube.

From the new stuff, I think the "VJ Search" we did in Times Square hosted by Au Revoir Simone is hilarious. I also love the segment we did with Tim from Les Savy Fav celebrating Hanukkah in a mobile trailer & giving out menorahs on the street to passer-bys in Soho, which is airing this upcoming Sunday at 10pm actually. There's also some great stuff that we did with Vampire Weekend. Some of it is on YouTube and soon will be up on the nyc.gov/tv site.

Are there any new New York bands you're excited about right now? Nothing too crazy right now, but I definitely love High Places. Also into Meneguar, Vivian Girls, and my old buddies My Teenage Stride.

Given the opportunity, how would you change New York? I wish banks weren't so tacky looking these days, especially Bank of America. Other than that, I'm feeling pretty good.

Under what circumstance have you thought about leaving New York? I left for college. I guess I would leave again under gunpoint.

Can you please recommend a good weekend hang-out that isn't unbearably mobbed? My parents house in Brooklyn. My mom will cut you some fresh melon.

Do you have a favorite New York celebrity sighting or encounter? I snuck into the city one day when I was 15 and saw Janeane Garofalo walking down the street and stalked her for a good three blocks and then summoned up the courage to ask her if she was who I thought she was, and she confirmed that indeed she was! All of a sudden I realized I was the biggest loser in the entire world, and with that I stopped striking up convos with celebs. Fortunately, many VIPs are now forced to talk to me out of contractual obligations.

What's your current soundtrack to the city? Right now its La Bouche, Technotronic, Crystal Waters, and Bizarre Inc. That's because it's my friend Peggy's birthday party tomorrow and I am DJing an early 90's dance set in her honor at Cakeshop. Everyone's invited! Her band The Pains of Being Pure at Heart are playing, and then I'm DJing from 12-2am or so. We did it once before and it was awesome.

Best venue to see music in NY. Cakeshop, cause its like my "Cheers".