After run-ins with white supremacists and others, actor Shia LaBeouf has moved his four-year, livesteaming protest of the Trump administration, HEWILLNOTDIVIDEUS, from New York City to Albuquerque, New Mexico. LaBeouf and his collaborators, Nastja Säde Rönkkö and Luke Turner, announced the new venue yesterday while also criticizing the Queens museum that ended the livestream earlier this month.

"On February 10, 2017, The Museum of the Moving Image abandoned HEWILLNOTDIVIDE.US. Their evident lack of commitment to the project is damning," the trio said in a statement."

The livestream launched on January 20, 2017 outside the museum, but soon after, LaBeouf got into a screaming match with a white supremacist. Then he was arrested for allegedly assaulting a man; one video suggests that LaBeouf did shove a man who said "Hitler did nothing wrong."

It seemed that white supremacists were mobilizing to harass LaBeouf via the livestream, and on February 10, the MOMI said HEWILLNOTDIVIDEUS would close for public safety concerns, "The installation created a serious and ongoing public safety hazard for the Museum, its visitors, staff, local residents, and businesses. The installation had become a flashpoint for violence and was disrupted from its original intent."

Neighbors also complained that participants were " loitering on their porches in the early morning hours, urinating and smoking marijuana."

The livestream has been resurrected outside the El Rey

On February 10, 2017, The Museum of the Moving Image abandoned HEWILLNOTDIVIDE.US. Their evident lack of commitment to the project is damning.

From the outset, the museum failed to address our concerns about the misleading framing of our piece as a political rally, rather than as a participatory performance artwork resisting the normalisation of division.

In fact, the museum demonstrated a spectacular lack of judgement—and courtesy to us as artists—by neglecting to consult us when they staged a political rally at the site of our artwork on January 29, 2017.

On numerous occasions, we voiced serious concerns to the museum about hate speech occurring at the site of our project, and requested that the museum act responsibly in moderating this and providing the public a means of reporting such incidents. Our requests were not even acknowledged, let alone acted upon.

Nonetheless, there had been no incidents of physical violence at the site of our project that we are aware of, nor that we had been informed of at any stage by the museum.

It is our understanding that the museum bowed to political pressure in ceasing their involvement with our project. We were only informed of the museum's capitulation in an email from their attorney, Brendan O'Rourke—a lawyer who we note also represents the current president.

It is clear, therefore, that the Museum of the Moving Image is not fit to speak of our intent as artists.

As of February 18, 2017, we are proud to be continuing HEWILLNOTDIVIDE.US at the El Rey Theater, Albuquerque.

According to his law firm bio, O'Rourke represented Trump, as well as Madonna and Shania Twain, in "ICANN [Internet Corporation for Assigned Names and Numbers] proceedings."

Dozens of people were participating in the relocated protest livestream yesterday. This morning, we spotted a solitary woman with signs: 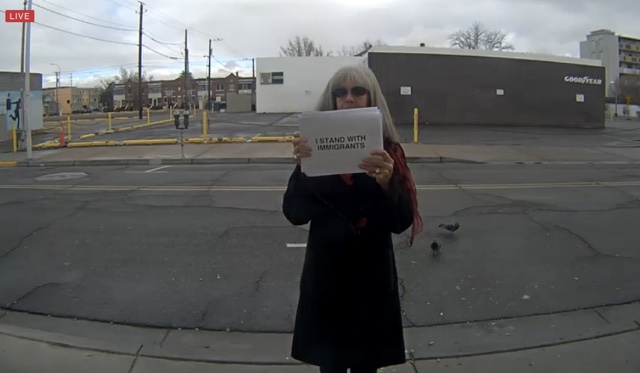 #HEWILLNOTDIVIDEUS
#museum of moving image
#Shia LaBeouf
Do you know the scoop? Comment below or Send us a Tip