Shia LaBeouf Is Still Sitting In The Movie Theater, And We're All Still Watching

The phone at the Angelika Film Center is busy. The line to get in, around 8 p.m. last night, was about 250 deep. At least one person is said to have paid $125 to cut to the front. Others have waited up to 12 hours.

Shia LaBeouf is inside, where he has been since Tuesday afternoon, watching every one of his movies in reverse chronological order. The theater he is in is open to the public, and while the first 24 hours saw more manageable crowds (only a handful when we dropped by late on the first day), many more have turned up and seem determined to watch Shia LaBeouf's movies in a dark theater with Shia LaBeouf. Why?

No one knows, not even Shia himself. This guy in the screenshot below stuck it out for many hours, awkwardly leaning over the entire time to get his face in the shot, trying to pal around with the actor. He is now forever part of the Shia LaBeouf sideshow. 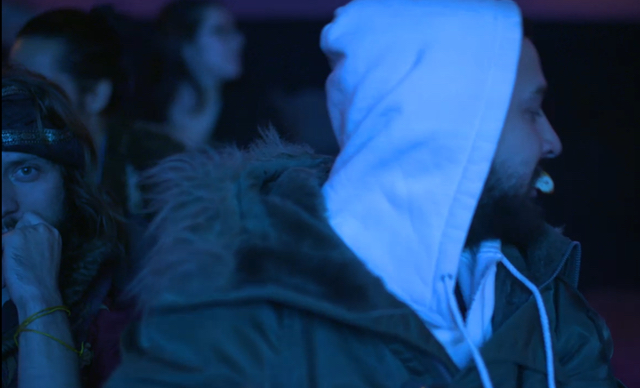 The livestream of the #AllMyMovies performance art piece is a bit more compelling. The small camera (which is not distracting to those inside the theater, only represented by a small green light) is fixed on LaBeouf's face, which has delivered a range of emotions and reactions throughout the past couple of days. LaBeouf has laughed, cried, yawned, slept, scratched his beard, shoved his mouth in a bag of popcorn, smiled, stared ahead. But he's an actor and a performance artist, and maybe none of this is real—is he crying human tears or actor tears, is his laugh authentic or art? We're guessing LaBeouf, if he were talking, would say it is too real—his career is flashing before his eyes, and everyone is watching it happen to him.

The desk of a man who has put in his two weeks notice. #ALLMYMOVIES #shialabeouf #transformers #fury #holes #disturbia #evenstevens #iamnotfamousanymore

Is Shia art? Are we Shia's art? What have we all been watching for the past couple of day? And is it making us... like Shia?

Laugh all you like but the Internet opinion-tide is turning for Shia LaBeouf, I can feel it

Last year, James Franco penned a piece in the NY Times about LaBeouf’s "erratic behavior," noting that "actors have been lashing out against their profession and its grip on their public images since at least Marlon Brando," and hoping that LaBeouf’s behavior was just that, and "nothing serious" like "a nervous breakdown." At the time, LaBeouf was working on his #IAMSORRY project, one of his many hashtagged performance art pieces, all of which are hosted on his website, The Campaign Book, and all of which seem centered around humility.

LaBeouf is on the final leg of this journey—our correspondent on the ground at Angelika tells us that Holes is currently screening, and if everything is on schedule, the curtain will close around 10 p.m.. You can tune in here until then.

#all my movies
#angelika film center
#Shia LaBeouf
#original
Do you know the scoop? Comment below or Send us a Tip