Sheila Heti Talks About Her Love Of Clothes & Internet Comments 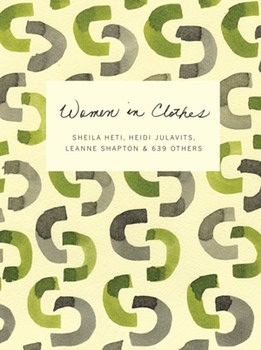 Six hundred and forty-two women’s thoughts on getting dressed makes for a heavy slab of a book. Women in Clothes, by Sheila Heti, Heidi Julavitz, Leanne Shapton and 639 others, weighs about as much as a September issue of Vogue. After reading through a few of Women in Clothes’ non-glossy pages, I was already addicted, and by the time I got to the end of the book I felt like I had been at a party where I’d had great conversations with hundreds of fascinating women from around the world, ranging from the famous (Lena Dunham), to the overlooked (a garment worker sewing our $200 jeans in Bangladesh).

Women in Clothes is not only about clothes. The interviews, essays and survey responses are so intimate and personal, I have gotten to know myself a little better through knowing these women I don’t know. The perpetual act of getting dressed has become a more personal, meaningful gesture. And as I walk out the door each morning, the incredible women of the world I pass seem to be sharing a little taste of who they are with me. I feel more at home in my world of womankind.

I got to chat about Women in Clothes with one of these women, Sheila Heti, who also happens to be one of the book’s editors and author of How Should a Person Be? — Amber Scorah

This book was everything I ever wanted a fashion magazine to be, but wasn't. I was half way through the book before I even realized, "Wait, this is a book about clothes and there isn’t one picture of a woman in clothes!" Yet I hadn't really missed the pictures.  Why did you decide not to include photographs of any of the women wearing their clothes, some of which, when described, were very personal and curiosity arousing? There's a way in which seeing photographs of women in clothes—even when well-intentioned—kind of boomerangs into making the woman reading the images feel inadequate, or competitive, or you compare yourself to the woman in the image and feel better or different from her. It's exhausting to look at images of women.

Even many of the drawings, including the "maps of my floor," which are a diagram of the discarded attempts at dressing for an event, were only outlines, leaving me dying to see the items and fabrics and patterns described. But in novels you get descriptions of clothing, you don't need to see the clothing. This book has something to do with novels—Heidi and I are both fiction writers, and when Leanne draws it's with the fewest but most expressive lines—where the imagination does its job, and there's pleasure in that.

You mention the book has something to do with novels; reading this book felt a bit like that, but also it felt like reading the internet on heavy-grade paper. The reader gets little glimpses here and there into an unrelated set of people and their lives and thoughts—things he or she might never normally come across, and things which feel so immediate and unpracticed. Plus it is not linear, you can jump around and go down different rabbit holes by topic. Was this planned, or did the book sort of evolve into this as it came together? The most interesting part of the internet—or the most internet-part—are the comments sections. I always read the comments on articles, I love the comments. In a way, the book is a like a long comment section (without the rage and stupid arguments). It makes sense for the book to feel a bit like the internet, because we made it with the internet—that wasn't only how we found many of our contributors and distributed many of our surveys, but how Heidi and Leanne and I interacted for most of the two years we were putting the book together. We were almost never the three of us in the same city. I think we all wanted to shape the book in response to the way many of us read now.

How would you categorize this book then—what is the genre? If there isn't a genre it fits into yet, what would you name the genre? It's a bit like an oral history project, a bit like a feminist tract, also like a sociology paper, also an art and design book, also a bit like a magazine. For a while we were calling it a crowd-sourced book, but that sounds kind of cold and clanky. Maybe it could be named "a choral work." I see the book as a big chorus.

Tell me a bit about the surveys you got back, how many did you get in total, and what kind of survey responses did you leave out? We got close to 1,000 surveys. We left out the kinds of statements that we'd encountered before—especially ideas we had encountered in fashion magazines. We kept out some replies that seemed to indicate a body-hate. We kept out stuff about labels. We kept out things that weren't as well-written. There are a disproportionate number of writers in the book, not because we were more interested in them, but because writers were more likely to have surveys you'd want to read: writers have trained themselves to look at themselves (and the world) in a really granular way, and to express thoughts that tend to go unexpressed. That's what we were looking for: specificity and surprise.

The book is so well-curated by topic. How did you create order out of the volumes of material you received? Where there obvious patterns that took shape? Can you tell me what your process was? Heidi did a lot of that work. She got all the surveys and printed them out and read through them and just noted themes as they started to emerge: sisters, clothing that got lost, being 40—they came from repetitions in the surveys. She just read really closely.

I became so engrossed in many of these women's comments that I would find myself compelled to Google some of them—to find out where they lived, or what their life was about; it was like I had a moment of intimacy with them at a party, then the next day wanted to track them down so I could be friends with them, because they were so amazing. How did you manage to get such a diverse set of respondents? We did everything we could think of to get the surveys out—including asking journalists in different countries to send them to their contacts (journalists know everybody), we had mainstream fashion magazines mention our survey on their websites; we asked different people we knew and handed out cards on the street which asked women to fill out the survey. It's the kind of book that any woman in the world could be featured in. I wish we had been able to interview every woman alive.

I know you have said that you got the idea for the book because you started seeing a man who was interested in clothing, and dressing well, and that you hadn't ever put much thought into that prior to being with him. Has going through the experience of editing this book changed the way you dress? Things have changed. I feel more in control of what I'm doing when I get dressed—I understand myself better and my choices and my preferences; it's like a new language I've learned, and also like having gone through really good therapy, where I don't feel like dressing is this unconscious act that a part of me is always struggling and wrestling with, in a kind of darkness or confusion. I didn't even realize I felt like this before, but now it's like water. I think I felt very alone in a culture that I somewhat believed in—but now I feel like I understand myself better, through understanding other women, and witnessing them understanding themselves.

Tell me one of your favorite survey responses. I always like Molly Murray saying she likes to get clothes in a more interesting way than "shopping" for them. That sticks with me so hard. An example: I was in my mother's basement over the weekend and going through my teenage writing, and I found a little box, and inside were two rings—rings my mother had given me when I was sixteen which I didn't like at all then, but which are perfect for me now. I forgot they ever existed.

Are you affected by these 639 other women when you get dressed now? Because I am! Absolutely. I feel so much love for the women in the book, and for other women, too. This love makes me feel like I'm dressing for them, and with them.

Tell me about what you are wearing now. A brown, patterned, hand-me-down dress from Leanne, sleeveless and kind of hippiesh. Also one of the gold rings from my mother I just mentioned. And simple new new underwear that I bought earlier today. I always feel guilty about buying underwear, as though it's some great indulgence, even though it's usually only ten dollars, and yet I feel little guilt over buying an unnecessary sweater for a hundred bucks. I guess I was a broke seventeen year old living on my own when I first bought new underwear, and now I feel young and broke whenever I buy underwear.

Sheila Heti, Heidi Julavits, and Leanne Shapton will be talking about clothes on November 5th at Symphony Space.

Amber Scorah is a writer from Vancouver, Canada. She spent six years in Taipei and Shanghai, where she was creator and host of the podcast Dear Amber: The Insider’s Guide to Everything China, about life as a foreigner in mainland China. Amber now lives and writes in New York City. Follow her on Twitter here.

#amber scorah
#interview
#sheila heti
#women in clothes
#original
Do you know the scoop? Comment below or Send us a Tip