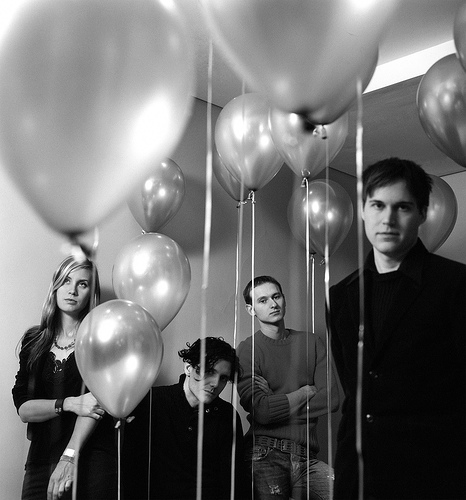 Stellastarr* are somewhat of a staple in the New York music scene. The Brooklynites are about to record their third full-length release this fall -- having steadily put out impressive tunes ever since Mischa Barton declared one of their first, My Coco, a favorite. One new track, The People, can be listened to here.

This Thursday they'll be playing new and old tunes at the Highline Ballroom for a special event called The Kor Project. The project hopes to bring together emerging, underground artists and musicians, with the proceeds going to the Leukemia Lymphoma Society of New York. For now, get to know the singer of the band a bit more through his (very) brief answers below...

How did you come up with your band name, and more importantly -- why the *?
The band name comes from a troubled teen who went to my high school. I don't talk about the *.

Three of you went to Pratt, was there ever a talk of collaborating musically while you were there?
We were in a band at Pratt called Ghistor.

Since becoming a band, how have you seen the NY music scene change?
Some of the clubs we used to play at on the Lower East side have been turned into condos.

What can fans expect from the new album?
More raw. Agressive.

Please share your strangest "only in New York" story.
Arthur had a good one the other day about a woman who basically squatted in front of him to take a piss in the middle of the subway stop. She was not homeless and her response was 'I'm sorry, I just really have to go."

Which New Yorker do you most admire?
There are too many to count, but I should just say Bob Dylan, even though he grew up in the mid-west. He made his name in Greenwich Village.

Given the opportunity, how would you change New York?
I wouldn't dare try to.

Under what circumstance have you thought about leaving New York?
I can't take the cold anymore. I keep saying that every winter, but I'm still here.

Can you please recommend a good weekend hang-out that isn't unbearably mobbed?
I don't go out much on the weekends, and if I do it's usually just to restaurants. Les Halles is a good one.

Do you have a favorite New York celebrity sighting or encounter?
I used to work at the newly revamped Russian Tea Room years ago. I showed Al Pacino around the place.

What's your current soundtrack to the city?
Mozart.

What's the best subway line?
Is there such a thing? I like the 'V' line they added a few years back. Comes pretty frequently.

Best cheap eat in the city.
The diner around the corner from my apartment.