Sex and the City Starts Filming...in the City 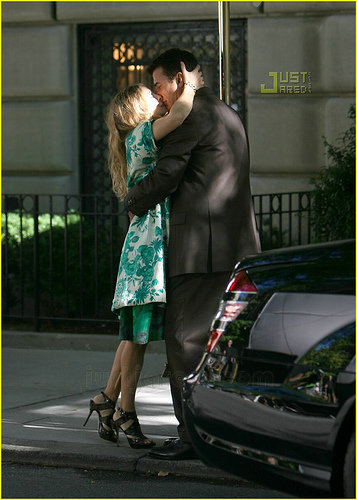 We got mixed reviews in our poll about the Sex and the City movie that's coming out more than three years after the show ended its HBO series. Whether we wanted it or not, the movie is going to happen -- and film crews and cast have already arrived.

Where are they filming? The Daily News reports that, toting around a bag only Carrie Bradshaw could pull off (one shaped like the Eiffel Tower), Sarah Jessica Parker filmed the first promo shots yesterday on Fifth Avenue across from the Metropolitan Museum of Art. Later in the day the movie began filming scenes on 63rd Street and Madison Avenue at the New York Academy of Sciences.

Onlookers saw Chris Noth (aka Mr. Big) makin' out with SJP, so it looks like the on-screen relationship survived post-Paris (for now). Poor Mikhail Baryshnikov. Other than MB, the entire cast seems to be back -- including Candice Bergen, who will return as the vicious Vogue editor. Looks like Carrie got herself a new job, and though it's unclear if it's at Condé or not -- she does have an assistant, who will be played by Dreamgirl Jennifer Hudson.