Sex and the City Movie Makes its Entrance in London 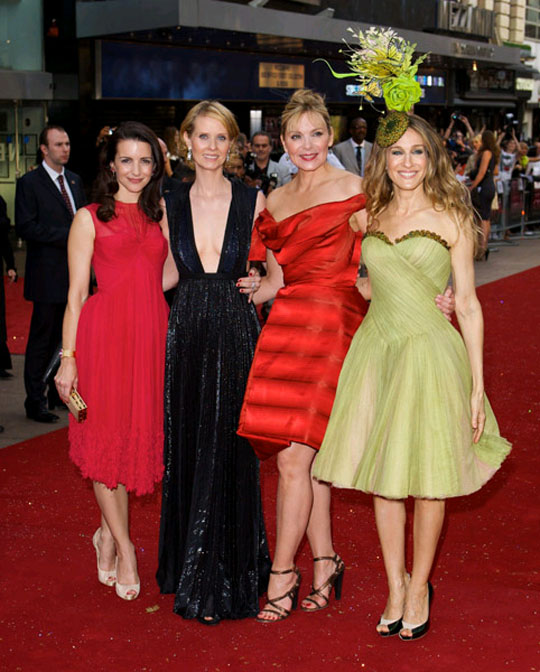 The long-awaited, much-hyped Sex and the City Movie premiered in London and the film's stars strutted their stuff on the red carpet. In particular, Sarah Jessica Parker wore not only a Alexander McQueen dress and Fred Leighton jewels but a whimsical chapeau as well. Created by go-to-milliner Philip Treacy, the hat is like a garden scene--butterfly, flowers, and maybe a mound of moss attached to Parker's head (it's all very fashion forward)

Whose idea was it to cast Jennifer Hudson?

“Michael Patrick King. I had wanted him to include an African-American [character on the show] for a long time, because I recognized that African-American women would legitimately say, ‘Why aren’t there enough women of color [on the show]?’ And I would say, ‘I agree. It hasn’t really reflected New York.’ And Michael was always [insisting] that you can’t do token [parts]; you can’t just throw someone in there because it’s necessary. You have to find something real or it’s even worse than not getting somebody. So he wrote this part, and he said he wanted Jennifer Hudson. And I was like, ‘Sure, get in line! Everyone wants Jennifer Hudson.’ And then she came in and read, which I couldn’t believe. And she was lovely. She’s beautiful in person. She’s gorgeous. She’s probably six inches taller than me, easily. And she was so happy to be there and so enthusiastic and couldn’t believe it."

The Sex and the City movie opens May 30.

#fashion
#sarah jessica parker
#Sex and the City Movie
Do you know the scoop? Comment below or Send us a Tip