"Seinfeld": So Over or So Timeless? 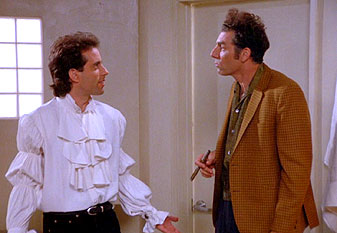 Forget the debate over whether Clinton should drop out; there’s a more divisive argument going on at Newsweek, where two critics are locking horns over whether “Seinfeld” (the TV series, not the car-crashing Bee Movie star) is still funny after all these years.

The series went off the air ten years ago this month and reruns are broadcast on 200 stations nationwide. “Seinfeld” advocate David Noonan argues that the show’s enduring success is largely owed to the supporting cast: “No sitcom in the history of television has featured a more talented or memorable bunch of second, third and fourth bananas than ‘Seinfeld.’ Period.”

He’s talking about Frank and Estelle Costanza, J. Peterman, Uncle Leo, Morty and Helen Seinfeld, and, of course, Newman. And perhaps the greatest proof of "Seinfeld's" resiliency is that isolated lines from the show can still amuse: Tippy-toes! Mr. Marbles? My wallet’s gone! Levels. The Place to Be! Man hands. Kramerica Industries.

Marc Peyser, on the other hand, says the show doesn’t hold up, and his argument is a tad askew. Among other things, Peyser blames “the laugh track” (huh?), and the characters’ lack of “depth.” But Larry David’s “no hugging, no learning” approach to sitcoms gleefully acknowledged the genre’s inherent shallowness and replaced sentiment with absurdity and farce.