See What Your Apartment Building Looked Like In The 1980s

New Yorkers new and native love to look back at the 1980s while spewing words like "gritty" and phrases like "bad old days." It was a different era for NYC, and if you didn't live through it, you may even feel some false nostalgia for the time. The era was well-documented, and you can scroll through thousands of headlines, photos, and videos to take you back, or give you a first glimpse... but now you can even see what your apartment building looked like at the time, thanks to 80s.nyc, a website that acts like a 1980s Google Maps. Here's 315 Bowery, which in the '80s was still home to CBGB: 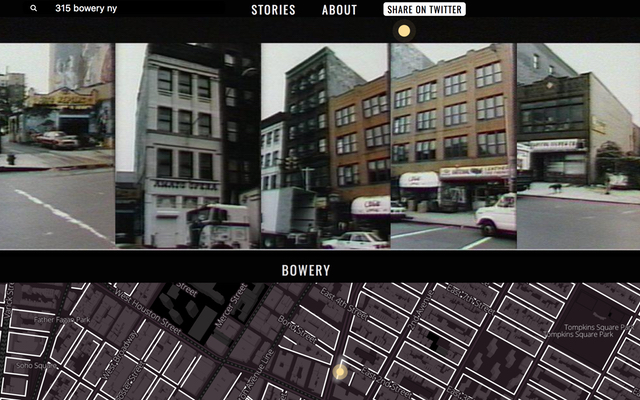 According to DNAInfo, the map's creators are Jeremy Lechtzin and Brandon Liu, who culled the nearly 800,000 images from the Municipal Archives. Lechtizn told the site, "We’re trying to give people a sense of what the city looked like in the 1980s—what entire blocks looked like, what an entire neighborhood would have looked like."

If you notice half your building missing from the photo that turns up for your address, it's because the images are "document tax lots, as opposed to individual buildings." Also because of that, don't expect anything special—you won't get any Berenice Abbott-style photography. For something closer to that kind of quality, you can check out OldNYC, which was created in 2012 by software engineer Dan Vanderkam using the NYPL's massive database of images.

And here's a reminder for those looking to uncover some more historic visuals of their current abodes: In 1978 and 1979, photographer Dinanda Nooney visited around 200 Brooklyn homes, photographing exteriors, interiors, and the families living there. This produced around 2,000 images, all of which are hosted on the NYPL's website.

#1980s
#80snyc
#cbgb
#flashback
#history
#maps
Do you know the scoop? Comment below or Send us a Tip