The frequency with which New Yorkers move can be a drag, but this cycle of relocation also creates a recurring opportunity to contemplate why we have so much crap. Some stuff lurking in our closets or forgotten under the bed seems to exist in our lives merely because we can't bring ourselves to part with it, either due to sentimentality or some neurotic belief that we might need that box of '90s alternative rock CDs some day. (What if there's a road trip?!) During a move, all the stuff that we hide from ourselves inevitably bobs to the surface, if only for a moment, bringing with it memories and disappointments and an internal struggle as we try to justify its continued existence in our lives.

In Geoff Sobelle's solo show The Object Lesson, this moment of reckoning is paused for an audacious, 90 minute archeological dig into all of our assorted materials and their significance. The seats and stage have vanished from the big New York Theatre Workshop space in the East Village, and Sobelle has transformed the room into a hoarder's paradise/minimalist's nightmare. Cardboard boxes are everywhere, thousands of them piled up to the ceiling and crammed into canoes that dangle above the room as if floating on our river of time and memories below. Most of the boxes are labeled evocatively—"classical composer busts," "dinneri"—and before the performance begins, the audience is invited to sift through the detritus like foragers at an eccentric hermit's estate sale.

Sobelle, seated in an old upholstered chair, begins the show delicately and mysteriously, with a long silence as the audience slowly settles (everyone is told to sit wherever they want, mostly on small stools made to look like boxes). When he finally speaks, the words have a certain ambiguity—we get the sense he's somehow been assigned the monumental task of cataloguing every last item crammed into the room, but this fragmented monologue soon takes on a deeper meaning when he declares "this isn't working" and places a desperate phone call to his past self, at which point the monologue turns into a thrilling dialogue with the present. It's one of several simple yet ingenious devices that make The Object Lesson an engrossing experience that pushes the conventional boundaries of what makes theater theater. 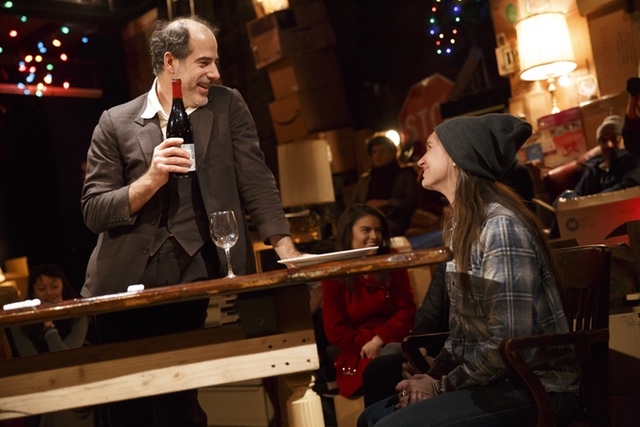 The audience is an integral part of The Object Lesson; Sobelle drifts through them like an octopus clambering through seaweed and coral, sometimes involving individuals directly and demonstrating a keen sense of who might make for an entertaining participant. Using a microphone to draw the audience into a somewhat hypnotic aural intimacy, Sobelle shares possibly personal stories and incidents as he rummages around in the boxes, evoking the mood of a darkened night in the French countryside or a lonely rooftop in San Francisco with just the tone of his voice and artifacts recovered from his past.

Sobelle is an endearing physical performer with feline agility, and what he accomplishes with a pair of ice skates and a dinner table is show-stopping delight. At turns funny and contemplative, The Object Lesson is ultimately an amiable reflection on what we keep and why; the physical, emotional, and mental souvenirs that stick with us through life. The show never takes itself too seriously, and the whole may add up to a little less than the sum of its parts, but there is a subtle magic at work here, which culminates in a boffo ending of literal magic, as Sobelle proceeds to pull an increasingly absurd lifetime of stuff from an apparently empty box. Over and over again he reaches into the box and produces more surprises, though it's unclear what he's searching for, if anything. In the end, exhausted, he holds the box up again to reveal its emptiness, and a sense of serenity settles over the room. We've gotten to the bottom of something at last.

#geoff sobelle
#opinionist
#the object lesson
#theater review
#original
Do you know the scoop? Comment below or Send us a Tip