Are you a fan of NYC's rich architectural legacy? And have you wanted to take an exclusive tour of the Woolworth Building's at the new Woolworth Tower Residences? Well, maybe you're one of the 34 lucky people who completed the Historic Districts Council's #PreservationPays challenge!

Over the past weeks, the Historic Districts Council has invited the public to take photographs of themselves in front of seven historically significant buildings, and then tag themselves with #PreservationPays (and the HDC's handle) on Twitter and Instagram. You can see some of the entries above! The next step is for the HDC to announce the winners, which they will do next week.

On Wednesday, September 28th, the Historic Districts Council is inviting contest participants and the public to its #PreservationPays Party at Jimmy's No. 43 in the East Village. Besides the winners' announcement, there will be live music and drink specials. 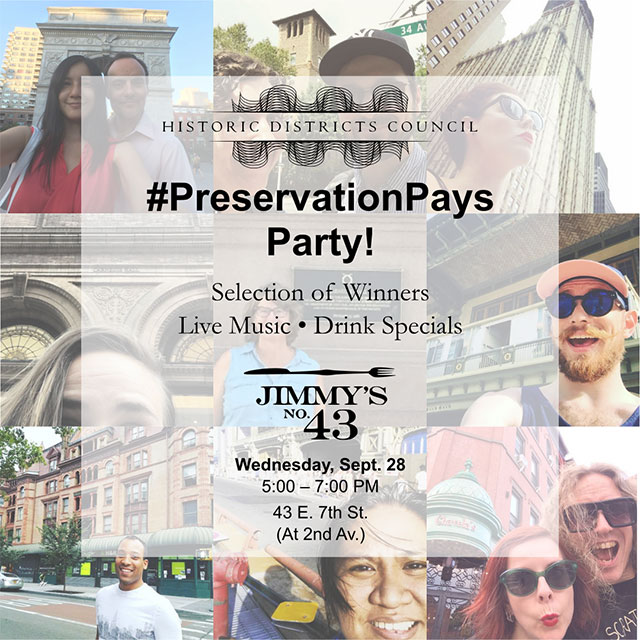 The five winners will be treated to a private tour of the Woolworth Tower Residences atop the iconic building, led by Historic Districts Council Adviser and official Woolworth Building Historian Lisa Renz. This tour, which is supported by Sotheby's International Realty, is a once-in-a-lifetime chance to visit one of New York City's finest landmarks.

The HDC also wants to remind everyone that "preserving historic buildings and neighborhoods is good for New York City."

Most New Yorkers believe this to be true in their hearts, but it is sometimes helpful to have the facts to back it up. In response, the Historic Districts Council created a series of infographics entitled “How Historic Preservation Benefits New York City.”

The graphics have a simple message: as part of New York City’s multi-billion dollar tourism trade, a generator of good jobs and an attractive option for affordable housing, landmark buildings and historic districts are a positive force for the financial well-being of the city.

Based on the expansive 2014 report “A Proven Success: How the New York City Landmarks Law and Process Benefit the City,” the infographics consolidate critical facts and figures to demonstrate the value of historic preservation in our city.

For full details about the #PreservationPays Challenge, please visit www.hdc.org/challenge. Gothamist was a partner in the contest.

#contest
#Historic Districts Council
#preservation pays
#woolworth building
Do you know the scoop? Comment below or Send us a Tip