See A Copy Of The Declaration Of Independence, Handwritten By Thomas Jefferson, At NYPL

The New York Public Library’s main branch in Bryant Park is currently holding a limited-time viewing of the Declaration of Independence, hand-written by Thomas Jefferson, to celebrate the 4th of July. The exhibit will be open on the first floor in Gottesman Hall today and tomorrow only: Monday from 10 a.m. to 5 p.m. and Tuesday from 10 a.m. to 7 p.m.

“The declaration is not a governing document, it’s a philosophical document," said Thomas Lannon, Assistant Director of Manuscripts, Archives and Rare Books at NYPL. "It's a passionate document that sets a guiding spirit. It’s a statement of revolution!”

NYPL's version is one of four handwritten “fair copies” of the Declaration of Independence that remain intact after 243 years. The document contains several underlined portions that show what Jefferson cut from the text before it was finalized. Notably, Jefferson removed a lengthy condemnation of the slave trade to appease delegates from Georgia and South Carolina. In the following days, Jefferson sent out several “fair copies” to his friends and family to show his original intentions after begrudgingly making edits to the document.

After this week’s brief public viewing, the Declaration will be on display at the NYPL as part of a permanent exhibition scheduled to open in November 2020. The Declaration will be displayed alongside 100 other artifacts on display from the Library’s research collections, including pieces of the original Bill of Rights and George Washington’s handwritten farewell address.

There is no charge for admission to view the Declaration this week, but note that no food, drinks or backpacks are allowed in the exhibit. More details here. 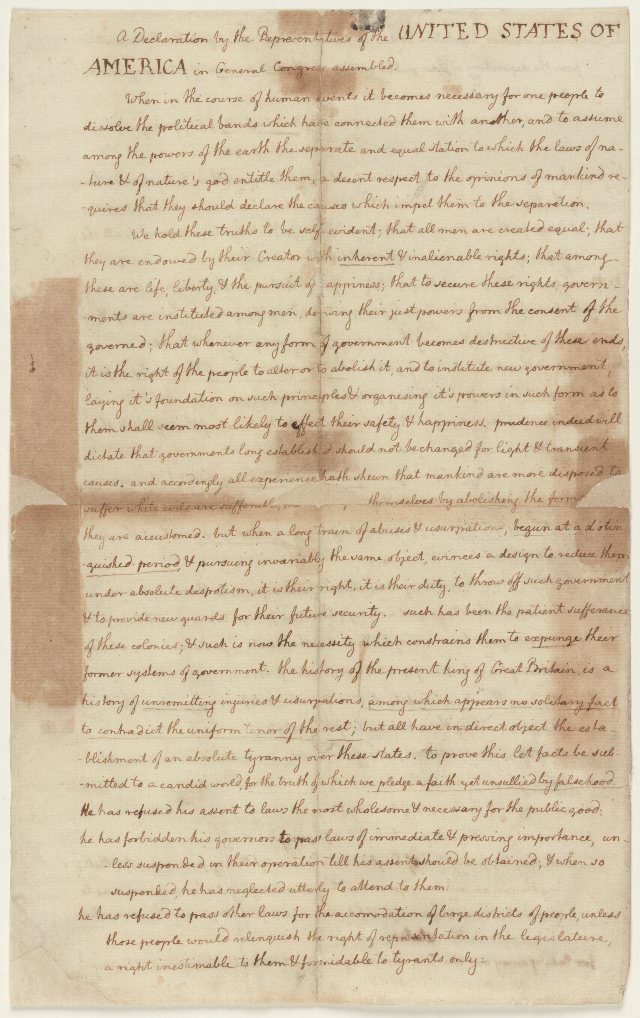 A scan of the Declaration. (NYPL)

#declaration of independence
#nypl
#thomas jefferson
Do you know the scoop? Comment below or Send us a Tip