By day, Daisy Tainton spends hours at her desk in the American Museum of Natural History, hunched over a jewelry box sized display case, meticulously cataloging the dozens of tiny insects pinned into neat rows. By night, she works with dead insects as large as her thumb, arranging them into fantastical dioramas that evoke fairy tales or strange dreams.

In one of her works, a horned beetle rocks in a chair, knitting with its spindly front legs, while two iridescent beetles play at its feet like kittens. They are in a room decorated with floral wallpaper and memorabilia you might find at your grandmother's house, except for the family portrait of an insect. In another display, a beetle lies back in a dentist's chair, while another wearing a mask works over it with a drill. No activity is too trivial for Tainton to portray: another vignette features a beetle sitting on a toilet, reading National Geographic.

"Not many people treat insects in these ways," Tainton says, careful to note that she isn't a taxidermist: insects have no skin, so the preservation process is different. Her work is also not quite entomology either, which traditionally involves placing insects in pseudo-natural settings, crawling up rocks or hiding in grass. "Whimsical entomology," she suggests.

In addition to showing her work at a Los Angeles art gallery, she frequently holds workshops at the Morbid Anatomy Museum in Brooklyn, a venue for exhibits, talks, and workshops about "art, medicine, death and culture," where she also demonstrates how to artistically manipulate bugs.

Tainton, 36, is soft spoken, but her hair is loud: long and hot pink with lavender roots.

"Kids love it," she says of her workshop. "Especially the girls," who Tainton adds often dress their exotic beetles in frilly skirts. A friend, Emily Gilbert, says that the instructor's charisma also helps: "I think kids look at Daisy and see an adult they would actually like to be. The hair pretty much does it." 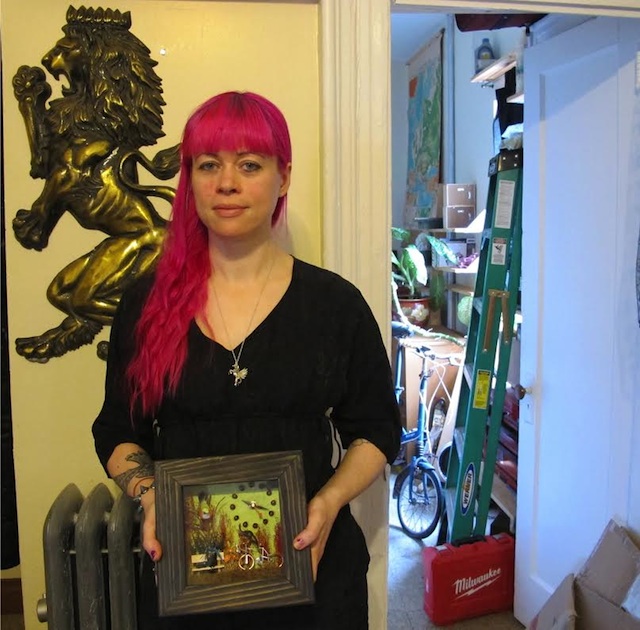 Tainton got into the business of handling dead bugs after she moved to New York from the West Coast in 2002 and got a job at a bead shop. A coworker noticed her affinity for working with small objects and connected her with an entomologist at the museum, who respected the skills and patience jewelers brought to the care and classification of insects.

But it was a part-time job at Maxilla and Mandible, a now-defunct Upper West Side shop specializing in museum-quality displays of fossils and insects, that taught her the art of working with outsize bugs.

"I learned how to play with them and glue their limbs on, which you wouldn't do [at the museum]," she says wistfully.

She attributes her work's surreality to the influence of two obscure artists. The Victorian taxidermist Walter Potter created offbeat yet charming dioramas of small animals taking tea and getting married, and in the early 1900s, stop-action Russian filmmaker Vladislav Starevich made films of insects who improbably danced, did back flips and interacted with dolls.

In her studio apartment above a store in Bedford-Stuyvesant, Tainton sits in the middle of her living room floor surrounded by boxes, pelts, and taxidermied animals. Mounted deer heads and antlers adorn the walls. Two (living) cats, Patrick and Mrs. Dash, muscle their way through boxes and occasionally gaze at the specimens.

Her dioramas can take months to make, with most of Tainton's time spent collecting small trinkets and toys until she comes up with a concept. Once she has all her materials, she prepares her bug. She often works with rhinoceros beetles, which tend to be the same scale as the tiny objects she finds.

From her freezer, she pulls out a Nikon box stashed between vanilla ice cream and a
bottle of gin. Inside, plastic bags hold individually-packed cicadas, rhinoceros beetles and frog leg beetles. Tainton orders her bugs online from beetle farmers or buys them from her former Maxilla and Mandible boss. The freezer is the best place to store insects, she explains, as the beetle larvae that feast on insect carcasses are slow to devour them in the cold. 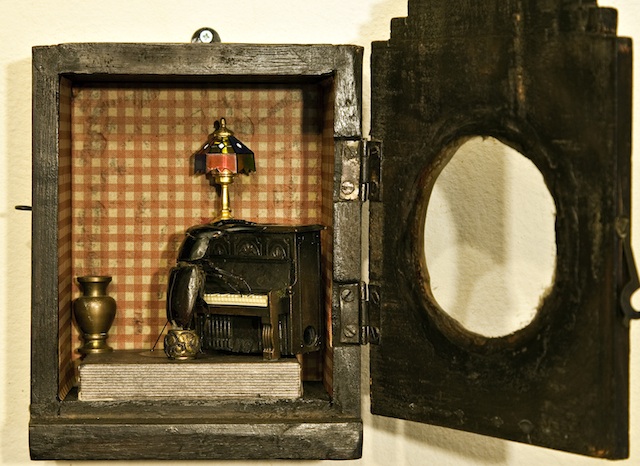 She lifts up a plastic packet. "They smell kind of bad, too," she says taking a sniff of a cicada. Their odor resembles the moist, slightly unpleasant earthy scent of mealworms.

Manipulating an insect carcass is a low-tech operation. To soften it, Tainton places boiling water in a shallow Tupperware container, adds the bug and lets it steam for a few minutes as its joints loosen. "I only have 20 to 30 minutes once it's ready to get it into the position I want before it gets too stiff again," she says.

Once she finds the right pose, she uses pins and foam to hold the insect into place while she fixes it with glue. She prefers Bond 540, but in a pinch, fingernail glue works fine.

"Most people don't understand how difficult it can be to work with and manipulate little tiny things, and how fragile the insects are when you soften them and move them around," she says. Her workshop students often groan at the challenge.

Once she has moved the bug into the desired position, getting the five legs where she wants them, the bug often becomes too rigid to move. Since she can't isolate and re-steam individual limbs, she has to redo the procedure.

"Sometimes you are almost done and you are placing it in the box and then a leg breaks off," she says. "Then you have to spend another couple of hours fixing it."

There's also the challenge posed by her cats. "They act like they are not interested," Taintor says, "But then I find a bunch of carcasses under the radiator."

Tainton hopes for more opportunities to teach others her craft. She sells her dioramas on Etsy for around $350, and charges $75 per person for workshops.

Last summer she gave a workshop at a birthday party for her friend's niece in Portland. Over a couple of hours, children aged 2 to 10 and their parents assembled beetle dioramas to take home. In one, a beetle walked a dog; and in another, a beetle cried over spilled milk. The birthday girl created a funeral scene.

"Families accumulate a lot of kid-made art," says Gilbert, "But this is quite different."

"These dioramas serve as a window into my students' imaginations," Tainton says. "Creations are always personal."

Regan Penaluna's writing has appeared in The Chronicle of Higher Education, The Philosophers' Magazine, and The Brooklyn Ink. She is writing a book about two 17th-century women who became philosophers when females were banned from universities. She lives in Brooklyn.

#beetles
#etsy
#Hobbies
#insects
#Side Hustles
#longform
#original
Do you know the scoop? Comment below or Send us a Tip
A new Gothamist is coming! We’ve moved comments over to our beta site. Click here to join the conversation and get a preview of our new website.