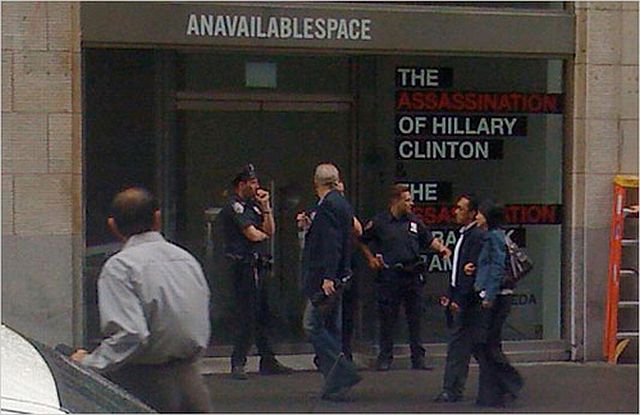 In March, simultaneous installations in two Chelsea galleries – one called The Assassination of Barack Obama, the other The Assassination of Hillary Clinton – were canceled “due to extreme legal pressures,” according to LVHRD. This morning the artist, Yazmany Arboleda, again attempted to hang his work in an empty storefront across from the New York Times building and got as far as putting up the name of the exhibit in the window before the NYPD, Secret Service, and – who would have guessed – the major media rushed to the scene.

Arboleda told authorities that the exhibit – which features a gigantic black penis (pictured after the jump) and mounted text like “WOULD YOU HAVE SEX WITH HER? NEITHER WOULD BILL.” – explores the idea of character assassination. You didn’t think he was referencing a literal assassination with bullets, did you? It’s just a “metaphor”!

Nevertheless, those philistines in the Secret Service ordered the show's title in the window papered over to protect the politicians. And Arboleda was detained and finally released, albeit outraged at the crackdown: “I’m renting that space; the space was allocated for an exhibition and it’s my right to put those words up. It’s terrible, because they’re violating my rights.” The moral here, obviously, is that referencing the assassination of a presidential candidate for some weirdo art project is unacceptable, but if you're doing it to push overpriced T-shirts, go nuts. 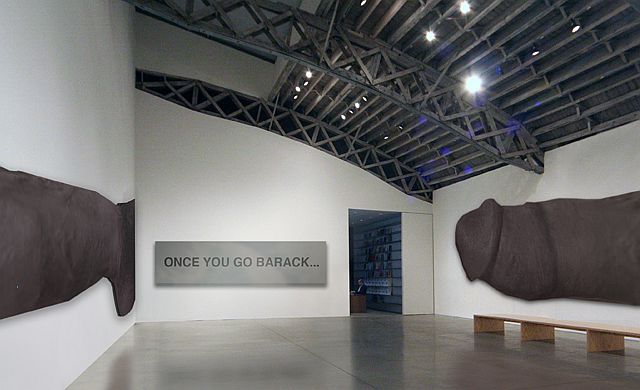