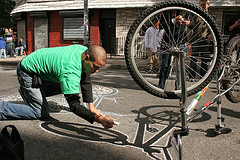 Hot on the heels of 6-year-old Natalie Shea being caught and fined for chalking up her sidewalk, a second chalker has been nabbed! This one, Ellis Gallagher, is older -- so his punishment was a bit more serious. Seriously! For chalk! The dusty, porous sedimentary rock that leaves markings which wash away in the rain. The Brooklyn Paper reports:

The city’s crackdown on sidewalk chalk “vandals” is officially out of control! It was bad enough when the Sanitation Department threatened the parents of a 6-year-old Park Slope girl with a $300 fine if they did not remove the offensive "graffiti” — her sidewalk chalk drawings on their own front stoop.

But after we ran our front-page story about Natalie Shea and her chalk “vandalism,” a Cobble Hill chalk artist who had never been arrested before suddenly found himself in handcuffs and spending a night in the lockup.

Coincidence? Not likely, considering that the artist, Ellis Gallagher, had been quoted in the original Brooklyn Paper piece — a story that the desk sergeant just happened to be reading when Gallagher was brought in.

Gallagher, whose previous markings you can check out on Flickr, said that in the past cops would let it go when they saw he was only using chalk. However, on October 17th while creating a chalk marking for PBS's "New York Voices" program, they changed their tune. We can't think of anything more temporary than outlining shadows in chalk, but the cops ultimately charged him with making graffiti, possession of graffiti-making materials and criminal mischief. Maybe they should go to the source next time...and bring Crayola down!

#art
#brooklyn
#brooklyn paper
#cobble hill
#crime
#flickr
#graffiti
#hot
#natalie shea
#new york
#New York Voices
#News: NYC
#park slope
#pbs
#photos
#rain
#sanitation department
#The Brooklyn
#the brooklyn paper
Do you know the scoop? Comment below or Send us a Tip
A new Gothamist is coming! We’ve moved comments over to our beta site. Click here to join the conversation and get a preview of our new website.