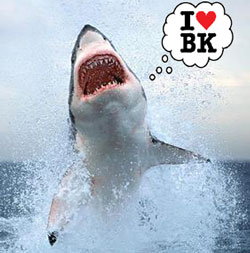 Last night we were informed by the Wildlife Conservation Society that there would be a major announcement made this evening at the New York Aquarium. While the official press conference isn't until 7:30 p.m. tonight (it will include Mayor Bloomberg, Brooklyn Borough President Marty Markowitz, and Councilman Domenic M. Recchia, Jr.), the NY Times managed to loosen some lips and found out it has to do with their Sea Change (what the WCS has dubbed their renovation project).

The aquarium is moving ahead with a "$100 million plan to renovate its building in Coney Island and create two massive tanks for more than 30 sharks." That is four times the amount of sharks than are lurking around its waters now, and a much larger space for them to swim in. The paper notes that "The aquarium’s single 90,000-gallon tank is to be replaced by two glass-walled tanks with a total capacity of 600,000 gallons."

The WCS also sent over some new information this morning, laying out exactly what to expect with the Sea Change (details after the jump). While they get around 750,000 visitors a year, an exec at the WCS said he'd like to bring in closer to 1 million; Bloomberg declared "we’ll reinvigorate the aquarium and transform it into one of the great seaside attractions in the country." Expect the shark takeover to be in place by 2013; it's just too bad Bertha isn't around to enjoy her new friends and new tank.

The Specifics of A Sea Change at the WCS New York Aquarium include: