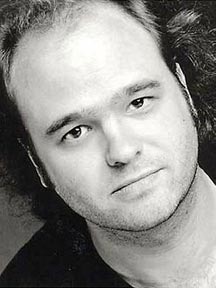 It seems like Pete Hornberger doesn't do much on 30 Rock, but Scott Adsit says it's a pretty accurate representation. And he should know, he's a producer on the Emmy Award winning Morel Orel, for which he's also a writer and voice-actor. And this Saturday, October 13th, and the two Saturdays that follow, you'll have the opportunity to see Scott and former Mad TV writer Tami Sagher at the UCB Theater perform hilarious long-form two person Improv. Gothamist caught up with the 30 Rock star to see what he's got planned for the future and a few questions about some earlier projects..

What does the R in R. Scott Adsit stand for? Is Scott really your middle name?
Scott is my middle name. The R stands for Robert, my grandfather's name. The Scott stands for the name my parents wanted to call me. I like the R. Scott thing. It gives me that F. Murry Abraham, R. Allen Rippy cred.

Among your many achievements is, according to Wikipedia, the role of an alcoholic and drug-addicted father in Reflections From The Heart Of A Child, a short-film used by many DWI Repeat Offender Classes and substance abuse rehabilitation clinics. How does it feel to play such a massive role in the recovery process and what advice do you have for those who find themselves viewing this video?
Wikipedia gets a lot of things wrong. This one they got right. Great. It was my first big roll in anything (also my last). If you ever find yourself watching this instructive, yet highly emotional film, then you have truly and irreparably screwed up your life. Your own misjudgment lead you to this fate and it's the punishment you deserve. I feel sorry for you. It could very well be the movie itself that you need help recovering from.
Oh, no, sorry. I'm thinking of Mr. Woodcock, there. Reflections is a great teaching aid.

Do you draw at all from your experiences as a producer on Morel Orel for the character of Pete on 30 Rock?
I very rarely get exasperated over at Moral Orel. Pete is usually exasperated over something. Though Moral Orel is Dino Stamatopoulos's show, I think I have a little more say as a producer there than Pete Hornberger has at 30 Rock. At least since Donaghy showed up. Moral Orel is a dream job. One parallel, though: Jay Johnston does see little blue men on occasion.

How accurate is 30 Rock's depiction of the actual role of producer?
Since 30 Rock doesn't really define Pete's function, it is frighteningly accurate.

Did you have any encounters with Improv guru Del Close during your time in Chicago? If not, were there any words of wisdom from Close that you find most helpful in your career?
I never studied with Del, and the way he is revered by so many people I admire makes me feel like I'm standing on the dock. I did meet him several times. Whether he knew who I was or not is known only to Del and his dealer. His words of wisdom I've only heard second-hand from Adam McKay, Kevin Dorff and others. "Feed the Muse", "Don't always go with your first instinct. Go with your third or fourth. They're probably less expected." I like all that. He is the seminal giant.

How do you feel about Improv vs. standup? Have you ever performed standup or had any interest in doing so?
I tried stand-up in the early Nineties with Dino. I liked performing that way. It was like walking up to the batter's box. People say it's nerve-racking; torturously soul crushing to walk out there. I liked it. What crushed my soul was hanging out with bitter, desperate comics backstage. They're a different breed than the bitter, yet eager psyches in the wings of an Improv theatre. Struggling stand-ups have externalized self-loathing into an art form. They're a hunching, quaking, unshaven lot.

Standups have to deal with the occasional heckler and bachelorette party. What is the improviser's equivalent of these two nuisances?
Well, generally, I've found that a heckler in an Improv audience is just enjoying the show so much that they want to be in it. They'll shout out, you know, what they might say at this point in the scene or try to suggest where they think the scene should go: "Put it in his butt!" So I have a warm spot for shouters at an Improv show. I don't like them, but I appreciate where they're coming from. Bachelorette party girls, on the other hand, need to understand that this is the greatest night of their lives, when they feel loosest and worry-free-est. The one night when they let their true selves come out. While the rest of their lives is just misery and lying to themselves. This is their night. Why are they wasting it watching tag-outs?

You starred, along with Brendon Small, in the Adult Swim pilot Let's Fish. What does the future hold for this program?
That was the brainchild of Mark Rivers, a great writer and musician. He writes for Moral Orel and does the music, too. Let's Fish was his first pilot for Adult Swim and Brendon and I had a blast doing it. The feedback was fantastic, but AS only had so much money and time and went with a different series. I loved the whole concept. Brendon and I were the only real-life characters and everything else was cartoon. It had a Johnny Quest/Mighty Boosh vibe. I'd love to say it's on the schedule, but it's passed away now.

Outside of 30 Rock and Morel Orel, what are some projects that you're currently involved in or contemplating?
I want to do more animation and I hope to do some movies when I have the time. Doesn't sound very active, does it?

Chicago or New York: which has the best pizza?
New York has surprised me a couple of times. I was a snob about pizza, but I've found one or two places that allow me to forget deep dish for a while. But they're few and far between. It's amazing how easy it is to put cheese and sauce on bread and get it wrong. I'll have to go with Chicago.

What is your strangest "Only In New York" moment?
I still marvel at the casual pissing in the street. Anywhere, anytime. There doesn't seem to be any shame in it. Thank God the garbage covers the smell.

Given the opportunity, how would you change New York?
I would have put Central Park closer to my apartment.

Under what conditions would you leave New York?
If Bush was elected mayor or a building fell on me.

Which New Yorker do you admire most?
T. Fey.